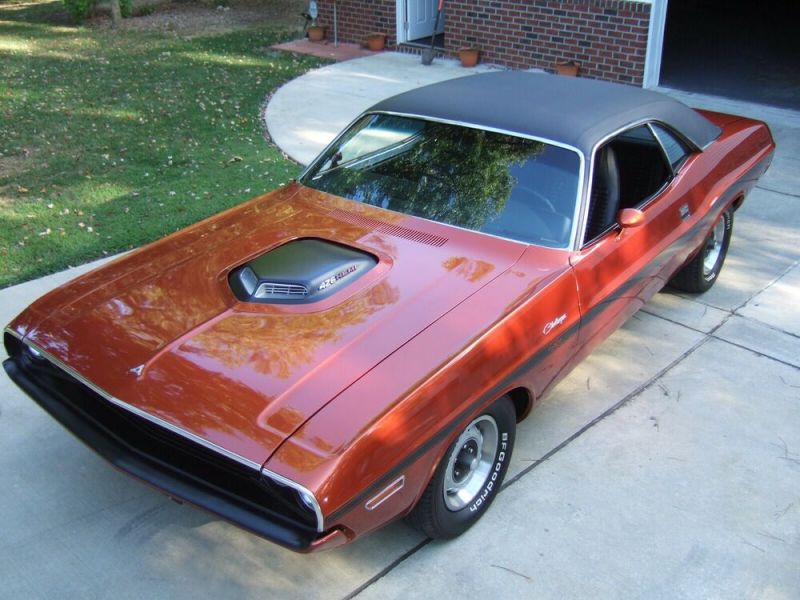 THIS 70 HEMI CHALLENGER R/T IS AS IT CAME FROM THE FACTORY EXCEPT THE 440 CU IN ENGINE WAS REMOVED AND INSTALLED A 426 CU IN 485 HP WITH 10.5.1 COMPRESSION RATIO. IT CAME WITH A FACTORY STEEL SHAKER HOOD, 3.55 LIMITED SLIP DANA REAR END AND A 727 TORQUE FLITE AUTO TRANSMISSION WITH A PISTOL GRIP SHIFTER.

THE EXTERIOR COLOR IS A 2005 CHARGER COOPERHEAD ORANGE. THE BODY IS RUST FREE FROM ARIZONA WITH THE ORIGINAL QUARTERS AND SHEET METAL.

THE INTERIOR IS BLACK WITH THE FACTORY REPLACEMENT. THE CONSOLE AND DOOR PANELS ARE LIKE NEW. IT HAS A RALLEY DASH WITH A 150 MPH SPEEDOMETER AND 8000 RPM TACH. ALL THE GAUGES WORK PROPERLY,

THE TIRES ARE B F GOODRICH WITH RAISED WHITE LETTERS.

THIS CAR IS A GOOD DRIVER AND RUNS ON 93 OCTANE FUEL. THE CAR HAS BEEN DRIVEN 2400 MILES SINCE RESTORED AND A NEW 426 CU IN HEMI INSTALLED.