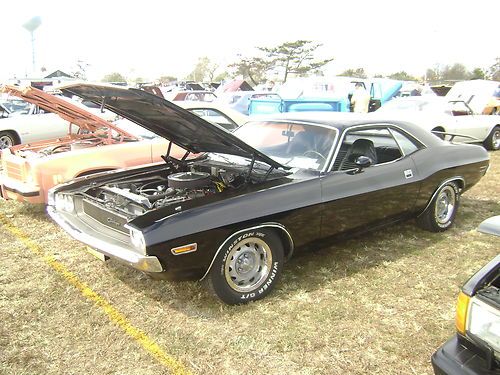 1970 Dodge Challenger 2 door hardtop 340 eng automatic 727 tranny , triple black,manual steering and brakes with rally dash package was originally ac car but compressor removed,car was originally a 318 eng but  a rebuilt 1971 340 eng was added a couple years ago have no documentation from perivous owner on eng.transmission was rebuilt less than 2 months ago still under warrenty.car runs great many new parts added tranny,radiator,hoses ,holley avenger carburator,tune up ,rear shocks,ft.stablizers,dash trim ,wiper switch,speedometer and cable was installed with 0 miles now shows 94 miles no idea what mileage is on car old speedometer was locked at 99999 while turning.purchased original am-fm radio and had upgraded with ipod connection by percision radio ,also added all 4 wheel trim rings ,front wheel cylinders,leaf spring supports and steering coupler.body in very good condition but does have small rust spot coming thru right behind rt front wheel see in photo.interoir is in very good condition seats were redone a couple of years ago.all tires still have good rubber.couple of minor issues are driver door does not lock and key does not work but have extra key set for doors and heater core is bypassed.all rally gauges work but tach it needs to be wired also have extra tach.all have power steering box pump and brackets if you want to make it power steering.only owned car 10 months and have done a lot to it ,just purchased firebird converible to go along with my gto so this must go.