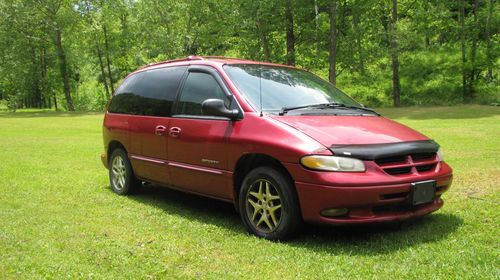 This van does run and drive, engine is very smooth as is the transmission. It does need work before I would call it "SAFE TO DRIVE". I would say it is more of a parts vehicle. It has bad brake line, struts, tie rods, rack and pinion. The engine does have some oil leaks as normal with this type of mileage. The body has some dents and rust as seen in the pics. The interior is kinda rough, the seats are not torn or ripped up but they are stained, and the passenger front seat has 2 small holes in the back of it. It does not have a radio, the instrument cluster does not light up. I listed it as having about 225,000 miles because the inspection sticker was put on just a little over a year ago, it shows being placed on at 204,000 miles. I dont know actual miles due to instrument cluster. Please understand I am not listing this as a great vehicle, it is a little rough. I WOULD NOT DRIVE on the road until work was done first. But would more so call it for parts van. Can drive in yard to see that it does work. I bought this van from a friend that needed some money, he bought it in April of 2004 and drove to work until Oct 2012 when brake line blew. If you have any questions or would like to look at it please let me know. As you can see from my previous feedback I will tell you anything about this van and will be honest with you. NO RESERVE!!! SOLD AS IS!!!