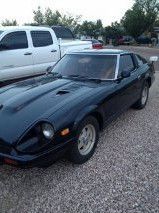 Hello, I have a 1983 datsun 280ZX up for bid. The car was painted about two years ago and has new tires on it. The vehicle does run good but will need a good tune-up, I replaced the fuel pump and distributor and module, the vehicle still runs rich. The front seats will need new upholstery. You might want to put new inside door panels on because they have a few tears. The dash is cracked so I put a dash mat on it. The only other thing that needs to be looked at is it has the digital dash but the speedometer stays on 0. The A/C, heater, electric windows, power mirrors, gauges, clock and power antana works fine. If you have any questions please email me before bidding since vehicle will be sold as is. Thanks for looking.