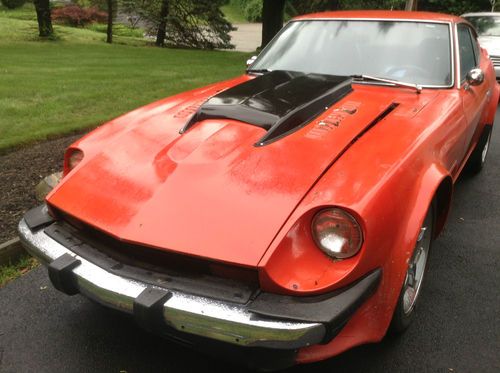 Up for auction in my opinion is a rare 1975 Datsun 280z. It is powered by a small block Chevy 350 that has aluminum heads and has been worked to around 400hp.this car was built in California back in the 70's .the overall condition of the car is very nice the interior has no rips in the seats ,has a nice mono steering wheel ,b&m shifter idol gauge a dash with no cracks a roll bar in the rear of the hatch it has a fuel cell, the z has no rust issues except some minor stuff around vents in small access doors on hood engine compartment is very clean,as is the interior of car. The car comes with a folder a half a foot thick with I think every bill it had in its life tons of papers you need to be a real gear head to understand them, The motor runs very strong a very impressive sound from the exhaust the car is also Fast !!!! Now what the car needs besides someone who understands the history and rareness of this car is a day at the spa this baby needs a new paint job to bring her back to her former glory . Also included in the sale are the original black bbs style wheels. And last but not forgot on this car has had a lot of work done By Scarab performance of Carlsbad Cali. Car has badging in the drivers door ad window and on the dash ,for all you Z nuts Scarabs are very rare I hope this car goes to someone who will love her and finish her in the manor she deserves. Good luck and happy bidding ,I'm starting the bidding very low with no reserve after the sale I would like a 1000.00 PayPal deposit balance by bank check car can be picked up when check clears.... Or cash is king pay me and take her away.......Steve