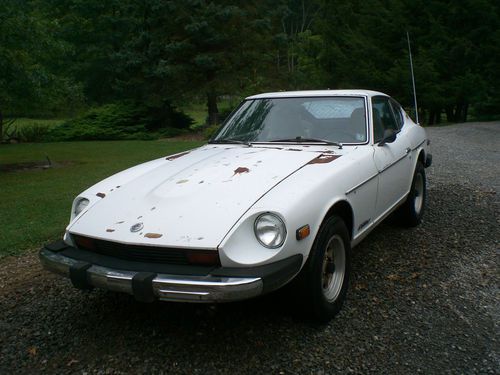 Up for bid is this great platform for a ground-up restoration of a classic sports car...I bought this car used in 1980 with 40,000 miles on it...It had recently been repainted bright white and a one-piece glass sunroof added...The original color was a sort of royal blue metallic paint...The original interior vinyl was (and still is) white and the carpet, dash, conole, and etc are black...This car has NEVER been wrecked; not even the most minor fender bender...It is 90% original save for the white paint and sunroof...I have the original steel wheels and wheel covers that came on the car (of course they are included in the sale)... I have the original owners manual (sans cover), and the original ignition key...Also have the original jack, lug wrench, and wheel chocks...I replaced the Sanyo aftermarket FM/cassette player that was in it with the proper unit from Datsun... The engine runs fine and is all stock; it has never been mucked with save for necessary repairs, ie. new water pump, radiator, clutch slave cylinder, new injectors, new vacuum line harness, and new coil...The oil and filter was changed about every 2500 miles using Castrol GTX 10W40 and Datsun factory filters...The spark plugs were changed yearly using the proper NGK plugs recommended for the car...Of course the air filter element was changed frequently as well (Datsun factory part)...The biggest problem with the car right now is that the clutch plates are frozen up and the car cannot be moved without starting in gear or towing...Before I parked it I had installed hard urethane bushings throughout the front end and new McPhereson strut cartridges all the way round, as well as new black rubber bumper pieces, so they're not dry rotted and crumbly...It's now wearing some very spiffy Gotti-look faux modular wheels (I never could afford to spring for BBS's...The rear hatch glass was intact a year ago but was the victim of a lawnmower-thrown rock that spiderwebbed the glass and it is now crumbling (boo-hiss!!)...The door handles are stuck and no longer operate from outside, you have to go in through the hatch...there are certainly rust issues but they are mostly surface...The floor pans of, course, are bad and need replaced...This car was garage-kept and babied for the first ten years or so that i had it, but a growing family forced me to use it as a work car...I had always intended to totally restore this car back to "Awesome" status (do any of you remember "Awesome"?), but finances and a place to work always prevented it...It hurts to sell what was once my "pride and joy", but I must!! I'd love to see someone take it that can restore it to its original (or more enhanced) glory...If you have an idea to put the ubiquitous small-block Chevy engine in it, please don't tell me! I couldn't take it! (Besides these cars were built to be BALANCED in all attributes right down to the tire size, aspect, and inflation, and it'll already bark the tires in all four gears!!) For those potential bidders who've seen this add before, the moron who was high bidder last time did not read the instructions or the description or even research how far it is from West Virginia to Fresno, CA (where he lives) and simply reneged on the deal...He's a BAAAADD Ebayer!!