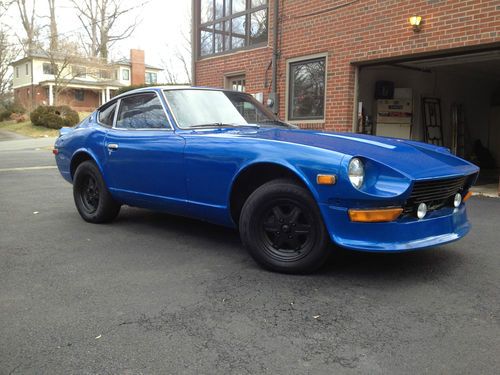 1974 Datsun 260z with original engine and ~73,000 original miles. Took the car on trade for a motorcycle, and don't really want/need it. I would classify this as a daily driver/project vehicle. Which runs excellently, but has a few minor issues that should be addressed. Desirable and more rare 2 seat model with smooth shifting 4 speed manual gearbox.

Gauges and lights all work (except for clock). Recently installed (by previous owner) headers and 3in FULL exhaust system from the headers back. 2 ram pipes with itg air filter, new electric fuel pump, new cables, spark plugs.
The engine runs perfectly, with no smoking, misses, leaks, or stuttering. New plugs wires and distributor cap. Clutch grabs smoothly and without hesitation or slip. 4 speed transmission snicks through gears with no signs of weakness or synchro issues.
Body is straight, with no dents. Rust appears to be surface only, with very little on the underbody.
Also includes box of parts. Looks like a couple of rear calipers for a rear disc brake conversion, and other odds and ends
Interior is very clean, needs drivers side door panel cleaned.
Best sounding car I have ever driven. Will upload video of engine/exhaust this weekend.
Known issues: Paint needs work. I would put it at 4/10. It is fine on the sides, but needs the hood/roof/trunk touched up (for daily driver use), or resprayed if you want. I have highlighted problematic areas in the pictures. Passenger window will not roll down- came off track- but will stay up. needs one rear tire (or two for the rear, <$60 each), ac does not work, no radio, but wired, needs front end alignment (pulls slightly right at high speed) and wheels/tires balanced, needs new brake pads and/or the rotors inspected. Battery discharges fairly quickly when engine is off.
Title is clean and clear, and displays the 72,800 miles as actual
Overall this is a great candidate for a daily driver, restoration, or custom project.
Please call me if you have any questions 239-595-9838
Thanks and happy bidding!