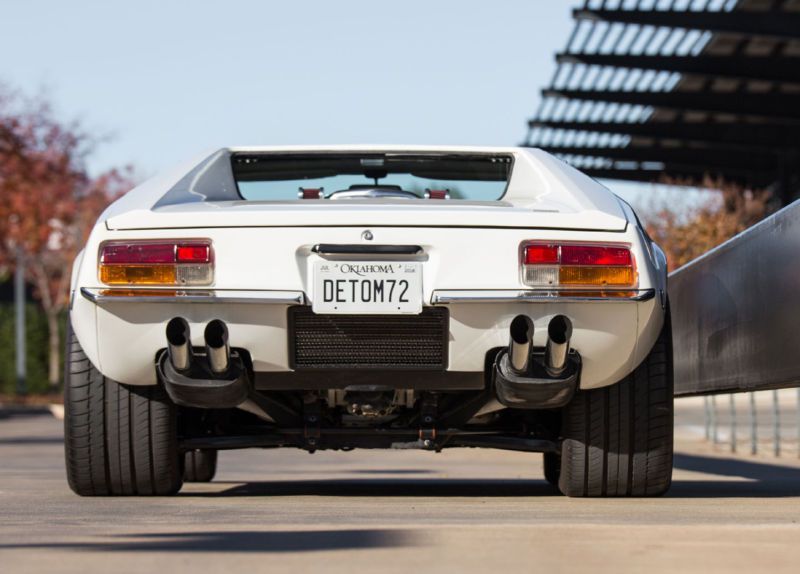 Send me an email at: mariamffetterolf@ukbikers.net .

New Page 1
1972 DeTomaso Pantera - 35,320 Miles - Original appearance with modern performance
Fantastic performance on a fresh 351C stroker-motor with the original motor preserved and included separately
Perfectly stock cars are appealing to the eye but a good running Prius may over-power a stock Pantera.
Why not keep your low-mileage Pantera basically original but add an aluminum-headed, blue-printed engine with 500
horsepower lying in wait? This car has the full package.
Chassis number: THPNMR12662
Never raced or crashed.
Maintained by professional mechanic with over 30 years experience with the marque.
No rust
35,320 carefully driven and maintained miles.
This car comes with two engines. The original engine has been separated from the car and is included with the
original screen engine cover.
The new engine is a 351 Cleveland stroker motor with aluminum heads, aluminum SVO manifold and a Holley 850 CFM
carburetor. This engine has been blue-printed and uses all new performance parts. Horsepower is estimated at 500
conservatively. The engine has approximately 1,000 miles of use. The engine was precision-built by one of America's
top engine builders.
The ZF transmission has been rebuilt and updated by RBT Transmissions and has approximately 2,500 miles of
driving experience.
Gear reduction starter, 10-quart oil pan, high output oil pump and a new water pump.
The air conditioning system blows cold and features a modern Rotary compressor.
The wheels are polished billet aluminum material, 17 inches in diameter. The tires are Michelin Pilot Sports:
225/45ZR17 in front and 335/35ZR17 rears.
The cooling system has been improved with a thicker core, large fans and stainless steel pipes and tanks.
The interior is as new and the dash has never had a radio installed. All lights and switches work right down to
the original windshield washer. The photos look like an original Pantera brochure.
The body is very straight and the new owner can simply start enjoying this car immediately.
Panteras have now become the objects of collectors' and investors' attention and there has been nearly a
doubling of prices over the last several years. This is expected to continue. The cars are truly a pleasure to
drive and are well supported from a parts standpoint and vibrant enthusiast community.
If you have been waiting for a Pantera to arrive on the scene that appealed to your originality instincts but
also was able to deliver a performance punch as well, you should make your move now on this phenomenal car.
This Pantera is located in Oklahoma. Reasonably priced transportation can be arranged, both national and
international.