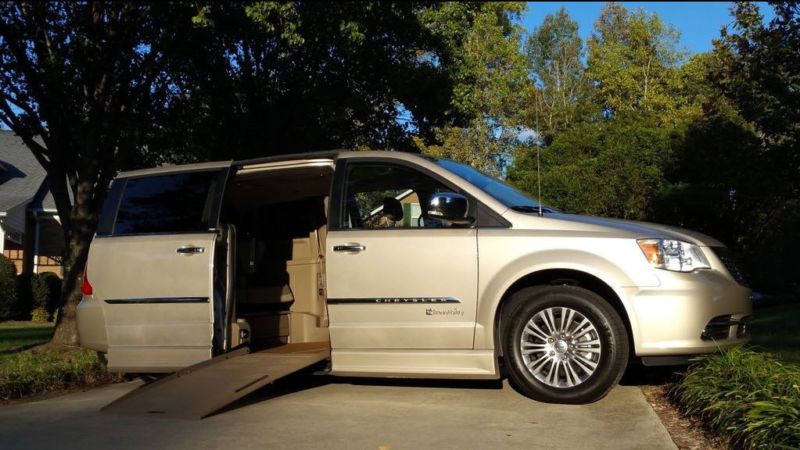 Please email me with any questions or requests for additional pics or something specific at: juliannmelikyan@juno.com .

This Chrysler Town & Country Touring-L BraunAbility mobility conversion van is in excellent condition inside and
out as you would expect for a vehicle with only 11,551 exact miles and an in-service date of March 20, 2014. The
van has been garaged since new and the like-new condition obviously reflects that. This beautiful van has never
been in an accident nor has it been driven in snow since it was acquired directly from the original South Carolina
owner. The vehicle is loaded with EVERY imaginable option including Stability Control, Blind Spot and Cross Path
Detection, Rear Park Assist, Rain Sensitive Windshield Wipers, Automatic Headlamps, Tire Pressure Monitoring, Rear
Back-up camera, Tire Pressure Monitors, Three (3) Zone Climate Control with automatic temperature control, Keyless
entry with immobilizer, 17" alloy wheels, P255/65 Michelin tires, Remote start system, Remote power door
lock/unlock, Remote Power Side Doors, Remote power lift-gate open/close, Heated leather seats and steering wheel,
Blu-ray player with two (2) flip-down screens, Wireless remote for blu-ray player and two (2) wireless headphones,
Load Leveling and Height Control, Premium Fog Lamps, Garmin navigation, UConnect 430 CD/DVD/MP3 /HDD 40GB hard
drive & 6.5" Screen Display, Bluetooth, SiriusXM satellite radio, Dashboard USB port, 115 volt outlet and two (2)
additional USB ports with composite video and HDMI connections for a gaming system near drivers side sliding door
and the equipment list goes on and on and on.