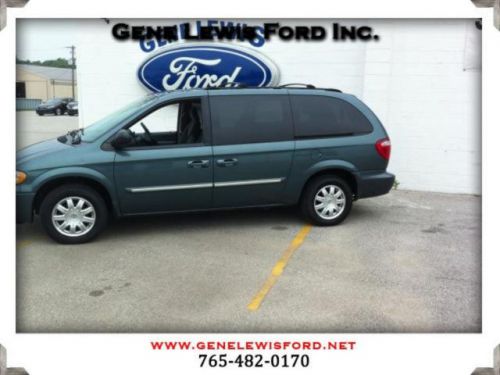 You can move the family around with this mini van. Give us a call today to set up a test drive. Gene Lewis Ford has been a Ford Family since 1912, please feel free to talk to one of the Lewis Brothers. Jim, Steve or David. We would be more than happy to sell you a vehicle. 888-781-1088. Debbie Breedlove will also be able to assist you with any new or used purchase, as she has been with Gene Lewis Ford since 1984. We are located just northwest of Indy, about 25 minutes from downtown Indy. Just off I65 at Exit 138, in Lebanon Indiana. Please feel free to visit our website for more information. Thanks for your interest in one of our vehicles. Gene Lewis Ford has been a Ford Family since 1912. We are a small Family owned dealership, that prides ourself in repeat loyal customers. Just off I65, Exit 138 in Lebanon, and only 25 minutes from downtown Indy. Please feel free to click on our web site at www.genelewisford.net and get your FREE VEHICLE HISTORY REPORT thru Autocheck.

We knew there'd be no Chrysler IPO before the end of this year, but Fiat is determined to get the best run going into 2014 and is back at the poker table with the UAW. The delay was said to be Chrysler's desire to clean up a tax issue with the IRS; turns out that also bought the carmaker time to try and close a deal for the UAW's 48.5-percent stake in the company before the IPO happens.
Whereas the price Chrysler was willing to pay was once more than $1 billion under the UAW's asking price, the gap has closed to just $800 million of late. A recent valuation of the company at $10 billion - a valuation the UAW has disputed - means Fiat would be looking to pay about $4.2 billion instead of the $5 billion that the UAW seeks. But the UAW needs to hold out for the highest amount it can get because its pension obligations through the Voluntary Employee Benefit Association (VEBA) are $3.1 billion greater than the VEBA's assets, which include the Chrysler stake.
There's a clause in the agreement that Fiat can buy the VEBA shares for $6 billion, but Fiat CEO Sergio Marchionne has said that the UAW "should buy a ticket for the lottery" if they even want $5 billion. The UAW, though, has more time to wait; it's Fiat that wants access to Chrysler's $11.9-billion war chest and that would like to avoid the risk of paying the full $6 billion for the UAW share if the float really takes off. With other valuations of Chrysler as high as $19 billion, a hot IPO could make that $6 billion look like a bargain.