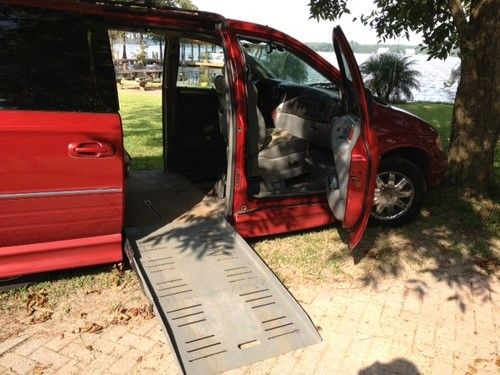 Condition: UsedA vehicle is considered used if it has been registered and issued a title. Used vehicles have had at least one previous owner. The condition of the exterior, interior and engine can vary depending on the vehicle's history. See the seller's listing for full details and description of any imperfections.Seller Notes:"Normal wear, no scratches or dents other than those in the pictures."

Wheelchair Accessible Braun Entervan. 86,000 miles, 1 owner. New tires, With hand controls and Ez-lock wheelchair lock in drivers area but can be easily moved. Kneel feature, lowered floor, Removable front seats for driver or passenger. Power Sunroof, three zone auto heating and cooling, Heated seats and leather, Navigation System and rear entertainment system. I added a receiver hitch and trailer light connection. Serviced regularly. Shipping can be arranged at buyers expense after payment in full. I purchased in 2009 as a new vehicle with 300 miles on it from Handicapped Driver Services in Marrietta, GA. There are many of the same year model on the internet with similar miles going for considerably more money.

I will accept cash, check (if funds are verified), and  paypal.