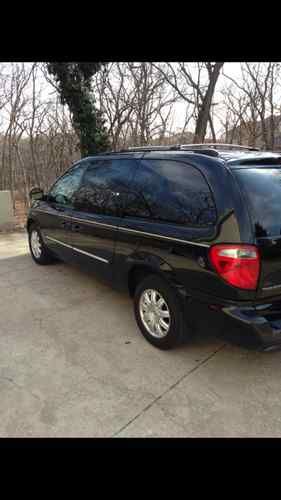 2005 Chrysler Town & Country Touring. 3.8 L V6 engine. Front wheel drive. Does well through all weather. 148,660 Miles (All Highway Miles). It has all the perks you could ask for... Power Heated leather seats, Stow & Go Seating, Power doors, power rear hatch, hands free controls, CD and cassette player, and its extra clean. It has a NEW (not rebuilt but NEW) Transmission as of 9 months ago. Brand new struts and shocks. Good tread on the tires (like new). Newer brakes. Its great for a daily driver. Extremely dependable. There is a little bit of rust starting around the rear passenger wheelwell, and a dent in the rear hatch above the bumper (you can see this in the pictures). The van has been well maintained with regular tune ups and regular maintenance. These vans are undoubtedly made to last! MAy the luckiest bidder win! Good luck and happy bidding!