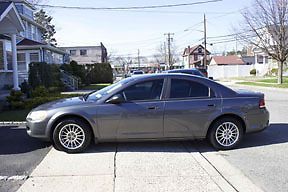 Google is no stranger to showing off some of the most interesting automotive destinations in the world, like the museums for Lamborghini and Ducati, or even a Tesla showroom. However, it's taking that technology even further with a new, in-depth look of the Sterling Heights Assembly Plant where the Chrysler 200 is made. Unlike these earlier online excursions, the new Chrysler factory tour is a fully guided experience that includes several 360-degree videos explaining many parts of the production process.
"Just as we pioneered a completely new Chrysler 200, we are pioneering a new way for consumers to research a vehicle. The Factory Tour is an opportunity for us to prove to consumers that the all-new 2015 Chrysler 200 is not one ever built before," said Olivier Francois, Chrysler's chief marketing officer, in the company's release.
Chrysler was already pretty proud of its nearly $1 billion in recent updates to the Sterling Heights factory having released a look at the 200's assembly process earlier this year. However, the new Google tour goes far deeper by including 12 videos, and between highlighted stops, viewers can swing the camera all over to get a full view of the action. The whole thing is an intriguing way to show the way a modern car gets built.