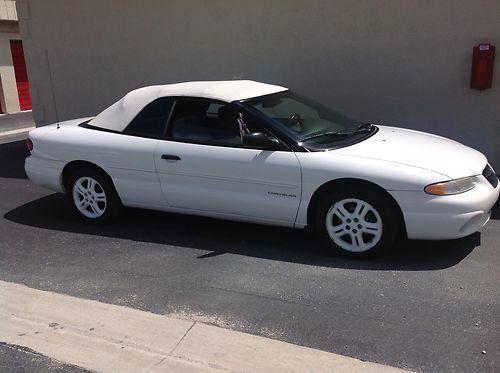 Up for auction with NO RESERVE and just in time for the Spring and Summer is this one owner adult owned 2000 Chrysler Sebring Convertible. Rare white body, top and wheels. Car was owned by my Canadian neighbors who snow-bird in Florida for the winters and just left back north. It has 130k highway driven miles from their seasonal trips to Florida from Canada. Car was well taken care of and is super clean with everything functioning properly. I just replaced the A/C regulator switch so it blows ice cold and added new front brakes and rotors. Absolutely no leaks and convertible top works flawlessly. Car will definitely go another 100k + miles. Have original manuals and 2 keys with 1 remote. Please send me a message if you need additional info or pictures of the car, I have many. Buyer responsible for pickup and seller reserves the right to end listing as car is listed for sale locally as well.