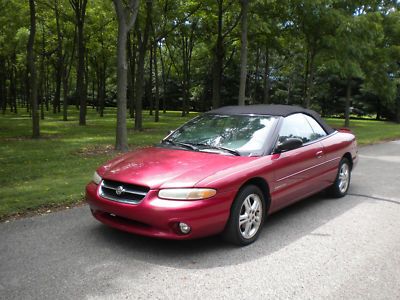 Condition: UsedA vehicle is considered used if it has been registered and issued a title. Used vehicles have had at least one previous owner. The condition of the exterior, interior and engine can vary depending on the vehicle's history. See the seller's listing for full details and description of any imperfections.Seller Notes:"new cloth top less than 2 years old, water pump and water lines less than 1 year old. approx mileage 180,000 unable to verify due to known Sebring issue with instrument cluster. instrument cluster can be repaired with solder. drivers door needs new clamps for interior. needs front left wheel bearing approx $150 including labor and parts at nearly any mechanic. trunk needs new hydraulic lifts. engine runs like a dream with nearly no problems. transmission in good shape. needs paint and brake pads."

Car has original 6 disk cd changer stereo with amplifier under passenger seat. needs driver side front wheel bearing replaced.
Front end was damaged on passenger side collision. damage fully repaired.
buyer must pick car up at location. no delivery available.
vehicle sold AS IS... license plate or towing are up to the driver. seller is not responsible for vehicle once title has been handed over. vehicle runs and can be driven.