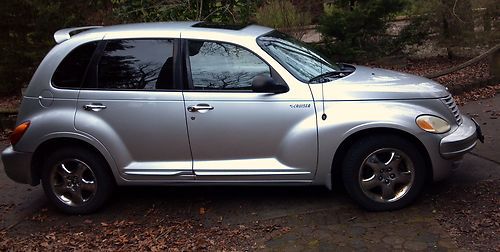 I will attempt to represent my PT Cruiser to the best of my ability. This car has some mechanical and cosmetic defects and needs servicing, but is still in good running condition. However, the antilock breaking system is not functioning because I believe a wheel speed sensor has failed. The paint, body and interior may need professional servicing if you are not a do-it yourself, mechanically inclined person. The tires match and have about 50% or more of tread. As far as I know, this car is free of major mechanical problems but will need some reconditioning. Its paint and bodywork will require minor and major touch-ups, with repairable cosmetic defects. It's engine compartment may have minor leaks but nothing I am aware of. There are body scratches, dings and minor interior blemishes. The car has Zenon front and rear bumper covers. It has a clean title history, with some service records available, and has just passed New Jersey emission inspection.

The car has been kept in the family. I bought it from my sister.

It's been extremely reliable. It has always started and ran flawlessly.

The air conditioner has weak to no cool output. It has never been recharged so perhaps that's the problem.

The timing belt and water pump have been replaced. Service receipts are provided.

I was hit from behind on I-95 at slow speed in stop and go traffic by a Ford Explorer. He veered off and clipped the driver side. I replaced both tail lights and thought I would do the body work. I decided not to finish the job. I have posted a good number of photos to illustrate the degree of damage.

The handle to adjust the recline on the driver side seat broke off during some freezing cold weather. I have the handle. It's in a good position for me so I never bothered to fix it.

The fog lights don't light. It could be he bulbs or a fuse. I haven't checked.

It could use a good cleaning inside and out.

The car was not in NJ during SuperStorm Sandy. It was in Richmond Virginia with me at the time.

This car has been one of the most dependable vehicles I have ever owned.

This is a car for someone that is mechanically handy that can fix it up for themselves or to re-sell.

Thank you for reviewing my no reserve auction. Email me with any questions you may have. If you have a low or zero ebay feedback please contact me before placing a bid. Thanks