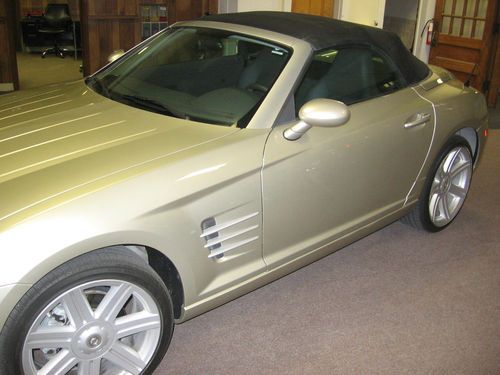 Like New 2006 Chrysler Crossfire Limited Roadster. Convertible  This baby has only 1869 miles on it.  It has been stored in a heated facility, treated like the baby it is.  It has all the options and a beautiful Oyster Gold Metallic Color.  There is no markings on it Mint Like New.( Dam it is New) .  It has been sitting waiting to be driven . Never ever been smoked in ! Orginal 1 owner vehicle.
Other options Tire Pressure Monitoring display
Instrument cluster with Tachometer
Premium Security Alarm
Universal Garage Door Opener
Sentry Key Theft Deterrent System
240 Watt Amplifier
Power Convertible top
17 mpg in the city    25 mpg highway

We knew there'd be no Chrysler IPO before the end of this year, but Fiat is determined to get the best run going into 2014 and is back at the poker table with the UAW. The delay was said to be Chrysler's desire to clean up a tax issue with the IRS; turns out that also bought the carmaker time to try and close a deal for the UAW's 48.5-percent stake in the company before the IPO happens.
Whereas the price Chrysler was willing to pay was once more than $1 billion under the UAW's asking price, the gap has closed to just $800 million of late. A recent valuation of the company at $10 billion - a valuation the UAW has disputed - means Fiat would be looking to pay about $4.2 billion instead of the $5 billion that the UAW seeks. But the UAW needs to hold out for the highest amount it can get because its pension obligations through the Voluntary Employee Benefit Association (VEBA) are $3.1 billion greater than the VEBA's assets, which include the Chrysler stake.
There's a clause in the agreement that Fiat can buy the VEBA shares for $6 billion, but Fiat CEO Sergio Marchionne has said that the UAW "should buy a ticket for the lottery" if they even want $5 billion. The UAW, though, has more time to wait; it's Fiat that wants access to Chrysler's $11.9-billion war chest and that would like to avoid the risk of paying the full $6 billion for the UAW share if the float really takes off. With other valuations of Chrysler as high as $19 billion, a hot IPO could make that $6 billion look like a bargain.