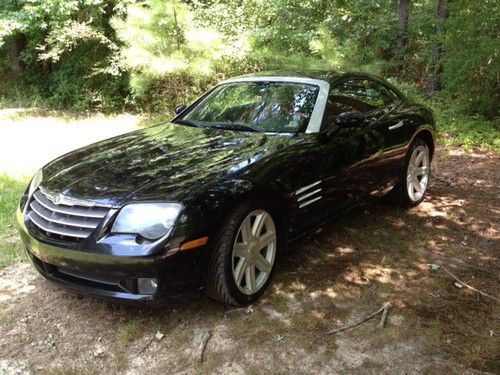 Condition: UsedA vehicle is considered used if it has been registered and issued a title. Used vehicles have had at least one previous owner. The condition of the exterior, interior and engine can vary depending on the vehicle's history. See the seller's listing for full details and description of any imperfections.Seller Notes:"This car needs a new cup holder, new front wheel bearings (It drives nicely but there a slight hone noise at 40 mph)There are some scratches and some paint chips on the hood,top,and passenger side door. On the passengers side on the front of the car the plastic grill is missing. The Air bag light recently came on."

I am selling a 2004 chrysler crossfire and  this car is in great shape. The head liner in this car is brand new due to the original having a problem with the glue that was used from the factory. The car needs a new cup holder and also needs new front wheel bearings, it drives nicely but makes a honing noise at 40 mph. The back tires are one year old and front tires are new but they do not match due to having a blow out when out of town. The air bag light has just recently come on, I was told by the dealer not to worry about it. These cars have an ignition problem around 50,000 miles and ours went out, but we had ours repaired. This car runs and drives good and it has been on several road trips and has never had an issue on any of them. The car interior and exterior is in good shape besides some minor scratches and paint chips in occasional places. The leather in the car is in good condition as well just a couple of worn places on the drivers side and where the steering wheel is used the most.

If you have any questions or would like more specific pictures please just ask.
Thanks and Happy Bidding!!

When Chrysler showed us its hand and revealed its five-year product plan to the world, we learned that the updated 300 sedan will bow at the LA Auto Show in November. Now, thanks to Allpar, we might have our first (super grainy) look at the new sedan a full two months ahead of its official debut.
Unlike its Dodge Charger platform mate, the new 300 isn't really all that different from the model currently on sale. That said, we're not sure if the changes shown here really reflect styling that we'd call "better," with the company's logo sort of floating at the top of the grille, and a more simplistic front end that lets the schnoz stick out a bit. Again, nothing drastic to talk about, but the new tweaks are kind of weak. Of course, we'll wait until we see the finished product in the metal before we make up our minds.
Don't expect things to change too much in terms of interior refinement or powertrain offerings, as well, with all the same leather and technology we've enjoyed in the 300 before, and the usual 3.6-liter Pentastar V6 and 5.7-liter Hemi V8 powertrain options. We'll know for sure when the car shows its freshened face in Los Angeles in November.