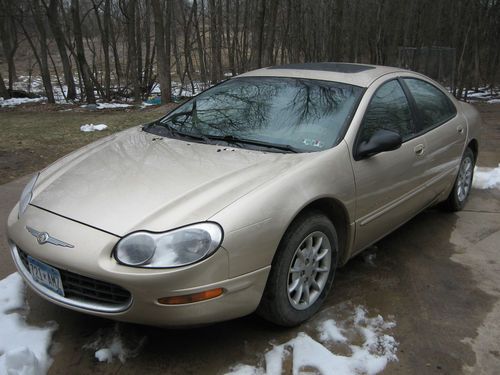 1998 CHRYSLER CONCORDE LXI
RUNS GREAT.
WILL NEED TRANSMISSION.
MOST EVERY OPTION.
SUNROOF
COLD AIR.
FACTORY 9 SPEAKER INFINITY SOUND SYSTEM WITH CD AND CASSETTE.
NEW BRAKES AND ROTORS LAST FALL
NEW TIMING BELT AT 118K.
NEW SERPENTINE BELT W/I 2 MONTHS.
NEW ALTERNATOR W/I 2 MONTHS
NEW BATTERY LAST YEAR.
29-30MPG ON THE FREEWAY.
24MPG AROUND TOWN
CAR DRIVES STRAIGHT, DOES NOT PULL.
CRUISE CONTROL BUT NEEDS A CLOCK SPRING WHICH I HAVE FOR IT., SO CRUISE DOESN'T WORK (ALSO COMMON ON THESE)
145K MILES
GREAT CAR EXCEPT TRANSMISSION WENT OUT.  WEAKEST LINK ON THESE CARS.
BODY IN GREAT SHAPE.  REAR BUMPER CRACK
CLEAN.
OIL CHANGED EVERY 3K OR 6K MILES DEPENDING IF REGULAR OR SYNTHETIC OIL.
I AM SECOND OWNER SINCE 55K MILES.
LEATHER INTERIOR IN GREAT SHAPE
CAR STILL SMELLS NEW ON INSIDE.
CAR LOOKS GOOD!!
SOLD AS IS; WHERE IS