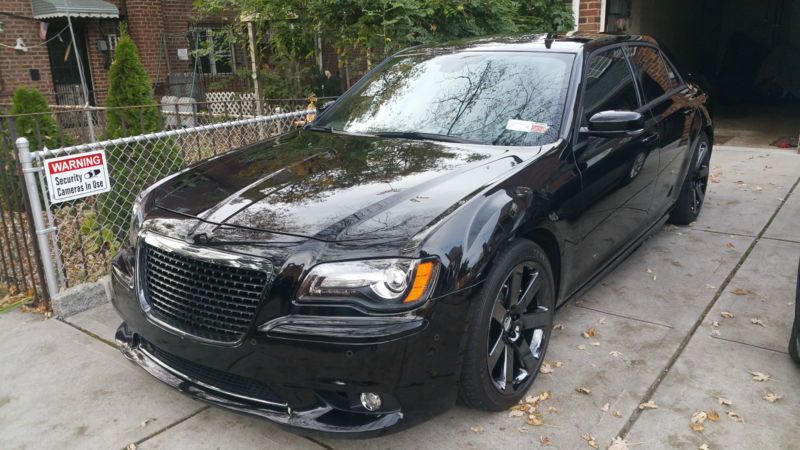 Send me an email at: cristalcppabelick@artfriend.com .

2012 Chrysler 300 SRT 13,600 miles, Non Smoker, fully loaded, black chrome vapor package, panoramic roof, safety
package which includes blind spot side mirrors, front collision warning, front and rear parking sensors and fully
adjustable cruise control, 3 suspension & engine modes normal, sport, & track, adjustable pedals, adjustable
steering wheel, 4 tire pressure monitor display, heated and ventilated front seats, heated steering wheel, remote
start, replaceable cabin air filter, SRT performance screen, Harmon Kardon radio 19 speakers with full factory 8"
navigation and Sirius radio. Michelin AS3 255 rear tires and 245 front tires with 85% tread life left on them,
slotted OEM rotors & Brembo calipers. Gorilla black lugs which are also wheel locks, all 25 lugs are locks off 1
key. The front fog lights have 6000k hi lumen LED's and the rear taillights also have LED fogs see rear picture in
gallery. This 300 SRT has EVERY option that this car can possibly come with. It has a Magnaflow catback on it which
gives it a very nice growl when accelerating other then that it is fully stock. I have both sets of keys.
Weathertech front floor liners the carpeting inside is like when it came off the showroom floor.
I am the 2nd owner of this car, I bought it with 4900 miles from Miami Florida with full factory warranty which I
extended to 4 more years and 60,000 miles which is transferable to the next owner. It is barely used, it has never
seen snow or rain it is garage kept in a heated garage see the pictures this car is MINT. I have done every
maintenance to this car myself, oil changes, washing and waxing, the finish is MINT see the pictures you will not
find a better pampered low mileage black 300 SRT anywhere.
No trades, Please no low balling, price is negotiable any reasonable offer will be considered, this car is located
close to NYC, if you are local I welcome you to come see it, pictures do not do this car justice, it is for lack of
a better word MINT, MUST SEE.