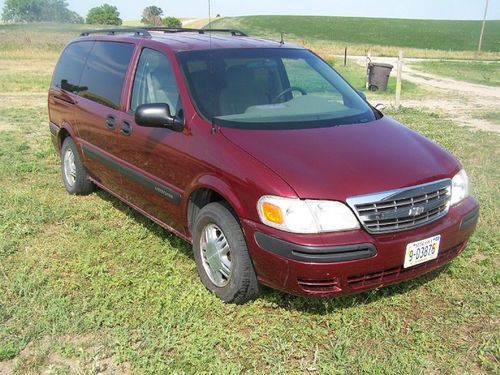 This van is a 2002 Chevrolet Venture LS. It has the 3.4L engine in it. This van has a lot of the toys on it including Rear heat & A/C, Air ride suspension, ON STAR, Both slider doors are power, Rear radio controls, seating for eight, CD player & built in garage door opener. This van has 150K on it for miles & it runs & drives really good & everything works on the van. The issue that we have been having is that it will over heat on you. I don't know what is wrong with it & we have another vehicle to drive so we thought we would see if someone wanted to figure it out. The body of the van is pretty good it does have some rust on the bottom of the rocker panels & the bumpers have some tears in them & the lift gate has a couple dents in it but you can see it all in the pictures. This van has a good clean & clear title. It will need to be trailered at time of pick up. If you would like to see the van in person feel free to call or text to set up a time. (308)293-3368 please don't call or text after 10pm. Thanks...