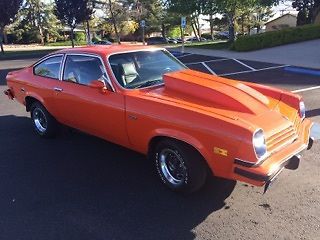 Please message me with questions at: carolynncttheiling@rumpypumpy.net .

1976 Vega GT, 454/4speed I bought this car about 2 months ago with the intention to drive it back
and forth to work. When I bought it the guy told me how nice it was but I didn't realize it was going to be this
nice. This is a beautiful car, the attention to detail is insane, every piece of the car is perfect from the dome
light to the door buzzer, everything is perfect. I can't own this car, it's too nice! The guy took a really nice
California rust free car that has been completely restored, every piece has been rebuilt or replaced. The body
absolutely has no bondo in it and it is laser straight the color is the original with a high quality paint job. The
interior is Monza spider that has been perfectly restored with tilt wheel and a tasteful custom dash that is really
impressive. The engine is a 454 with a Crane roller cam, crane roller rocker arms, with stud girdle, titanium
retainers, 750 Dominator Holley, team G intake, all msd ignition, large tube headers that fit really well. The car
fires right up, it sounds really good, its not crazy loud it has a nice rumble I would guess it to be in the 475hp
range not radical but definitely all there. As you can imagine with a big block in a vega its really fun to drive
really doesn't hook up that well even with posi track, but to me that is part of the fun. Taking off from a
stoplight it wants to boil the tires. It has 3.08 gears so it runs down the road really well at 70, its a really
nice driving car has sway bars front and back. This guy has had a lot of vega's so he really knew what he was
doing. The car is just like you ordered it from the factory in 1976 with a 454/4speed option, how cool is that!
Show room nice, easily show car nice!