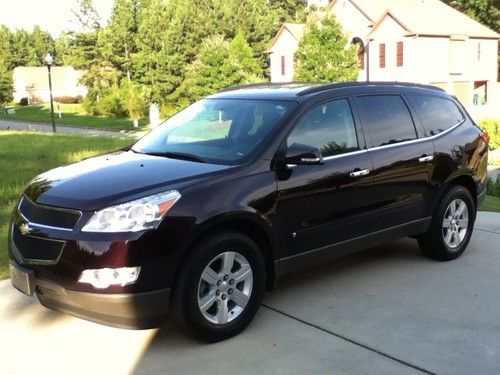 Condition: Used: A vehicle is considered used if it has been registered and issued a title. Used vehicles have had at least one previous owner. The condition of the exterior, interior and engine can vary depending on the vehicle's history. See the seller's listing for full details and description of any imperfections. ...
This is a 2010 Chevy Traverse Crossover SUV in great condition. Well maintained and always garaged. It is the 1LT Trim Level with Satellite Radio, 8-way power driver's seat, and rear-view camera. It has just over 79,000 mostly-highway miles. Never smoked in and kept clean and tidy. No accidents. The color is dark cherry metallic.
The car has normal wear in good cosmetic condition, no dents or deep scratches, just a couple of very small touch-up points that come with any used car. The tires have about 1/2 their tread remaining.
No known mechanical issues. The powerful 3.6L direct-injected V6 runs great. Equipped with an aftermarket trailering hitch receiver, but we have done very little towing with the vehicle.
This vehicle is priced to sell, well below similar listed models and below the suggested retail book values. Email for more information or to arrange a test drive and I will return e-mails or by phone. I will only deal in-person with the actual buyer paying with cash or official check. I will NOT deal with 3rd parties or using Paypal. Online scam artists are just wasting their time.