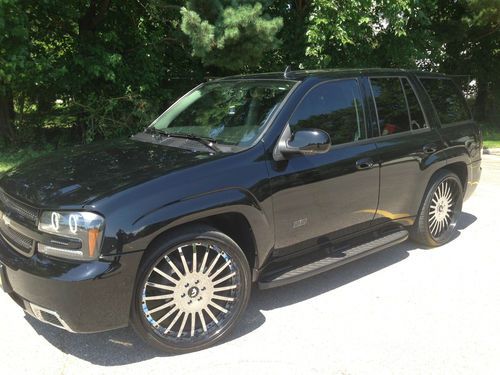 2007 Chevy SS Trailblazer for sale. 64500 miles looks great in/out. Custom exhaust built by local company with custom valance for dual exhaust. Truck sounds really good. If u know anything about these trucks it's like a corvette SUV. 6.0 liter LS2 with every option for that year. Sits on 24"( REAL) Forgiato Andata rims staggered with black lip. Paid 6k just for rims last summer. Have receipt. LED tail lamps with angel eyes headlights. Running boards added to give more aggressive look. Black burl wood on dash and doors and custom steering wheel with wood also. Aftermarket kenwood nav with DVD and iPod aux cord. 2 Rockford Fosgate 12's with Rockford amp and 1000w American bass for highs. Sounds great. The pics don't do this truck justice. It is really fast and you won't see another SS Trailblazer like this one. Turns heads everywhere. Only serviced at Chevy dealer. Will possibly trade for the rite Harley street or road glide. But this truck is very nice. Looks runs rides and sounds great. Very well maintained and just about immaculate in and out. Leather and suede seats and also has tow package. I never drove this truck in winter. Can look under it and tell even though its AWD. Always garage kept also. Thanks