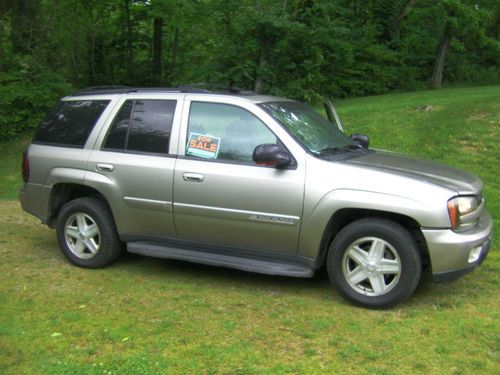 Condition: Used: A vehicle is considered used if it has been registered and issued a title. Used vehicles have had at least one previous owner. The condition of the exterior, interior and engine can vary depending on the vehicle's history. See the seller's listing for full details and description of any imperfections. ...
2002 model being sold as is where is with no warranty,it is being sold at no reserve to the highest bidder. I have put plenty of pictures up as well as provided a video link below as a complete description of this vehicle,the time to ask questions is before bidding,the time to check out the vehicle is prior to bidding and not upon picking up. You will not test drive or ''toy'' with this vehicle after becoming the highest winning bidder,I expect and require you to pay a $200.00 deposit immediately after the auction and you are to contact me via ebay message center to arrange final cash payment and pick up again immediately after the auction ends. You cannot bid on this vehicle if you have less than 5 feedbacks without first requesting to do so. Please honor my rEquest or you could miss out on a terrific deal.
2002 Trail Blazer top of the line in 2002,vehicle drives out great and seems to have a good running 4.3 liter engine and a smooth shift automatic transmission,4wd does work. It is a bank repo that does not appear to have ever been abused. What we found that you may not see is the passenger side window switch is bad,turn signal flasher is weak & needs replaced,ac is ice cold however the dash fan switch is not working so the air is not blowing at high speed,the speedometer works however the mileage light does not work so we do not know actual miles. The dash lights flicker from time to time and was told it is probably the connection plug at back part of instrument panel,this could also be the issue with mileage reading however it does not cause any issues as far as performance or safety. I think it will need rear brakes soon,tires are good and balanced,steering and handling are great,suspension and  exhaust tight. Center interior console lid is loose and the rest of interior is in real good condition looks to have been well kept for with exception to carpets show some ware and could use some cleaning,more so on driver front side.
value="http://www.youtube.com/v/ http://youtu.be/d10o2vyix2g ?fs=1&amp;hl=en_US"><param