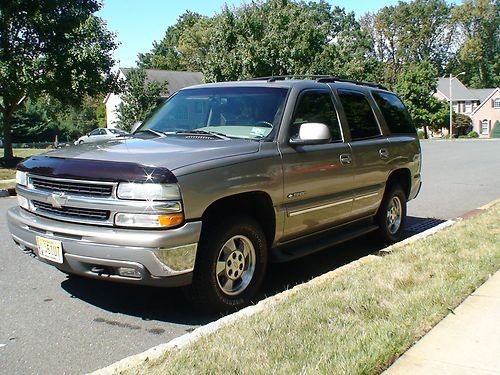 Condition: UsedA vehicle is considered used if it has been registered and issued a title. Used vehicles have had at least one previous owner. The condition of the exterior, interior and engine can vary depending on the vehicle's history. See the seller's listing for full details and description of any imperfections.Seller Notes:"Usual wear and tear for a truck of this age , small area of rust starting on passenger rear door near bottom, cruise control does not work"

Nice  Chevy Tahoe with 3 row seating. Electronic climate control front and back, Am/Fm  CD, new Firestone Destination Tires, new stainless brake lines, new power steering pump, and brand new transmission with 100 thousand warranty from Chevy. Four wheel drive 360 Vortek engine with Volant Cool Air intake for better performances.  Tow package with hitch and receiver with plug in wiring.  Truck is in excellent shape for its age.  I am the second owner , I bought it from my neighbor whose husband died I only put several thousand miles on it as my business plans fell through.  Will make a great SUV for someone! Abs light is on which happened to all these Tahoes affects nothing and will not interfere with inspection.