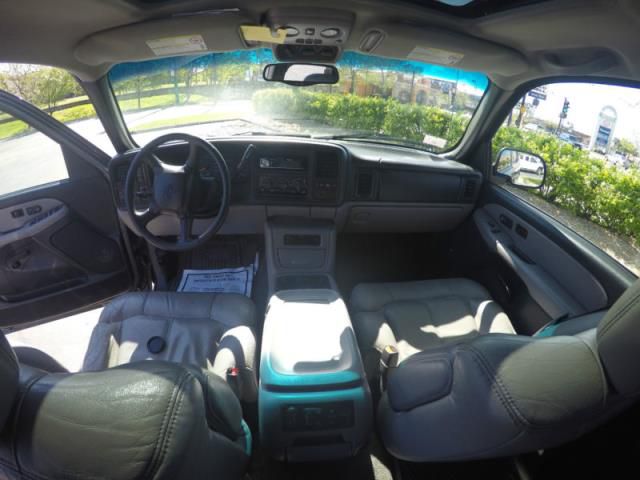 I am selling my 2001 Chevy Tahoe, as pictured here. This has been a great truck. I'm the 2nd owner. Highlights:runs great, needs nothing (turnkey)meticulously maintained - some of the work since I've owned it: all brake lines replaced, brakes x 4 within the past 2 years, driver's front wheel bearing, intake manifold gasket, spark plugs, oil + filter changes every 5-6 thousand miles (always with Mobil 1 full synthetic), accessory belt replaced recently, water pump replaced in 2011, alignment last summer (suspension tight), transmission service (tranny is solid, doesn't skip)interior and exterior are in excellent shape for its age (CONSTANTLY getting complimented on the car)all electrical - lights, windows, seats, compass, etc etc work properlyAftermarket (Pioneer) head unit installed (on otherwise stock system w/ subwoofer) - w/ bluetooth a2dp streaming audio and phone, ipod hookup (oem head unit will be included, easy to switch back out)AC blows cold, heat hotseat heaters in frontlumbar supportTow package - great tow vehicleLED spot-light in the grille - installed last year, lights up with the high beams (no separate switches installed) - see photos. Buyer has the option to exclude this, in which case I will replace the grille with a completely stock one (in this case, LED spot will NOT be included with purchase)Areas of Imperfection: Exterior - very minor dings and scratches here and there. No major dents, no keying. One small area of penetrative rust in the left quarter panel at the very bottom about the size of a quarter. Hardly noticeable unless you're on the ground, but worth mentioning. Car has wintered in the north, so it has the expected degree of chassis rust, but nothing terrible. Interior - driver's seat has some scuffs/wear and tear (other seats are in great shape). Driver's seat armrest is suprisingly torn up.