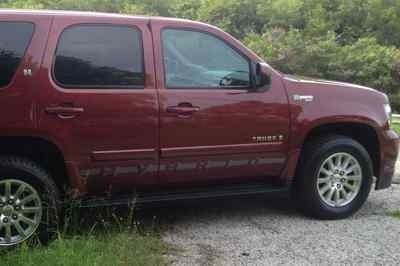 THIS IS A GREAT 4X4 HYBRID TAHOE, THE REASON I PURCHASED THIS VEHICE WAS FOR ALL THE FEATURES IT HAS AND THE TOWING CAPACITY TO PULL A BOAT, TRAILER, ETC.

THE ONLY REASON FOR LISTING IT FOR SALE IS I DON'T WANT TO HAVE IT SITTING IN STORAGE. I WOULD RATHER HAVE SOMEONE THAT LIKES TO HAVE GREAT GAS MILEAGE, BUT

MAY ALSO NEED A 4X4 OR TO HAUL A TRAILER FOR BOAT ON OCCASION.  I AM IN THE MILITARY AND GETTING READY FOR DEPLOYMENT.

I JUST HAD NEW TIRES PUT ON A COUPLE MONTHS AGO.

IT HAS THE 3RD ROW SEATING FOR ADDITIONAL PASSENGERS.  I ONLY USED THE BACK 2 TO 3 TIMES.

IT ALSO HAS DVD WITH 2 WIRELESS HEADSETS. IF THE VEHICLE IS IN PARK YOU CAN SEE IT IN THE FRONT SEAT AS WELL ON THAT DVD SCREEN.

IT HAS ON-STAR AND NAVIGATION FOR EXTRA HELP. THIS HAS THE BOSE SYSTEM  AND MOON ROOF/SUNROOF. THE COLOR COMBINATION LOOKS GREAT.

LIGHT CASHMERE LEATHER INTERIOR, BACKSEAT HAS CONTROLS OF THEIR AIR/MOVIE/AM/FM/DVD AS WELL. IT HAS 120 PLUG/IN FOR COMPUTER/PHONE.

HEATED LEATHER SEATING FOR THE DRIVER AND PASSNGER.  3 BUTTONS FOR 3 DIFFERENT REMOTES FOR THE GARAGE OPENERS. HAS RUNNING BOARDS TO HELP  GETTING IN.

SAFETY LIGHTS STAY ON IN THE DAY. VERY BRIGHT. THE VEHICLE HAS TINTED WINDOWS DONE BY THE FACTORY. FOR THE 2 FRONT I PUT ON 45 TINT (VERY LIGHT).