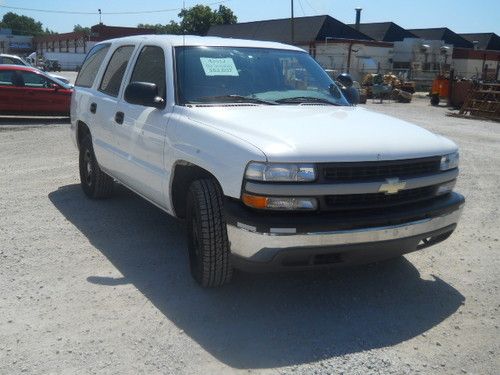 My 2006 Chevy Tahoe with Police Pursuit Package includes Upgrades to protect your Engine, Transmission and Brakes - Priced at only $9,895

A law enforcement version of the Chevrolet Tahoe, the 2006 Tahoe Police comes in two different packages; a 4WD trim and a RWD trim, the latter is intended for pursuit driving. Engines consist of a standard 4.8-liter V8 engine that produces 275 hp and 290 lb-ft of torque and an optional 5.3-liter V8 engine that yields 285 hp and 325 lb-ft of torque. Both engines are paired to a 4-speed automatic transmission enabling the Tahoe Police Vehicle to achieve an EPA estimated 13 mpg city and 17 mpg highway.

My 2006 Chevy Police Pursuit Tahoe has:

VIN: 1GNEC13Z96R151525 Find out more about the Tahoe here (Please save this craigslist ad to your favorites before checking the VIN): Click Here to get your Vehicle History Report

Markings (decals), brush guard and Emergency lighting have all been removed

I will provide the following repairs and documentation to insure that you can properly license and title the Tahoe: