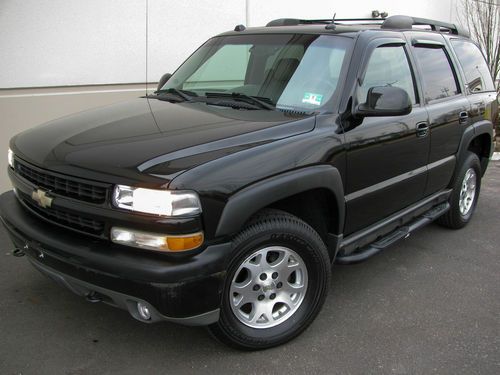 New Tires and Recent Tune Up

The interior and exterior are in overall excellent shape and show minimal signs of wear on the front bumper; One of the nicest Tahoe's on eBay. The interior is outfitted with Heated Leather seats and in dash 6-CD Changer with Bose Sound.  The optional Z71 Package gives this truck go anywhere off road abilities and the blacked out sport appearance really make this truck stand out.

Mechanically this truck is in top shape.  Completely serviced, all required maintenance has been performed including recent brakes, battery, and fluids.  Maintenance records are available on this vehicle and show that the truck has been well cared for. The tires are new and the car has a current NJ inspection.  A 90-Day Powertrain Warranty will be sold with this vehicle to the new owner at no charge with the Buy-It-Now price. All sales are subject to a $249 doc fee.