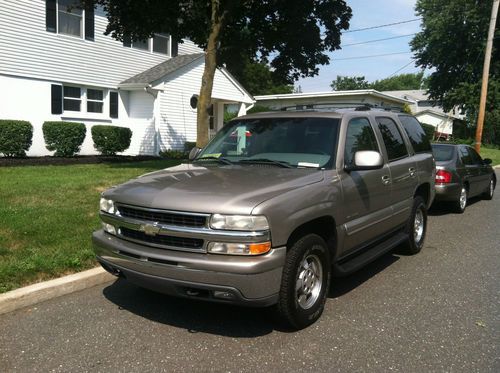 Condition: UsedA vehicle is considered used if it has been registered and issued a title. Used vehicles have had at least one previous owner. The condition of the exterior, interior and engine can vary depending on the vehicle's history. See the seller's listing for full details and description of any imperfections.Seller Notes:"01 Tahoe LT with factory air ride. This truck is really clean. It Has all the factory options u can get. The leather is barely worn. Interior is a 9 out of 10. AC is ice cold. It has rear AC also. The truck has 100500 miles. Brand new tires and rear brakes. Pads rotors and e brake shoes. New master cylinder and recent service. Trans flush and oil change and brake fluid flush. Great family truck The body is straight ! Call or text with questions.Seven three two 68 seven 8966."