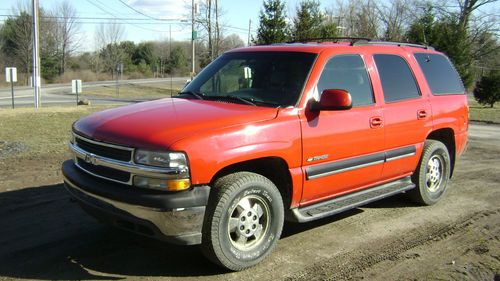 Up for sale today with NO RESERVE is a 2001 Chevy Tahoe Loaded.  Just installed a new Interstate battery, Master Cylinder and Rear Brake Line.  The tires are 4 matching tires with above 80% tread remaining.  Leather seats show only normal wear with the exception of the drivers seat where it has developed a rip that has been and currently is taped up to prevent it from getting worse.  No lights on and no surprises.  The exterior of the vehicle is in average condition for a 12 year old vehicle with over 200k miles.  Please see pictures as I did show the rust on the rear as well as the small dent on the rear quarter above the bumper.  There are chips, scratches and dings throughout the vehicle as you might expect and some small stains here and there on the carpet where the floor mats don't always cover but overall in good condition.  The vehicle runs and drives as it should.  We did quite a bit of driving with the Tahoe, most years being over 30k and it was taken off the road as we just didn't believe it was reliable enough to continue to put that kind of mileage on.  As you can see in the pictures it does have the two seats in the rear for the third row seating.  It has towed a small utility trailer from time to time but nothing major.  As the winner will see upon pickup, we have no shortage of trucks here for towing purposes.  It is the original motor and tranny, with only normal maintenace work being performed over the years.  We are the second owners of the Tahoe and it was bought locally back in the fall of 2006 with 83k miles, knowing the original owners quite well.  Other than the tear in the drivers seat the only other issue inside the vehicle is the center console latch does not currently work and it has a hard time staying shut.

You are welcome to come inspect the vehicle at anytime during the auction here in Trumansburg, NY 14886.  Just call me prior to coming and I will make sure I am at my shop/office where the Tahoe is currently located.    Kyle   607-227-2687

Title in hand and the high bidder will win this auction as it is NO RESERVE, the way all of my items listed sell.