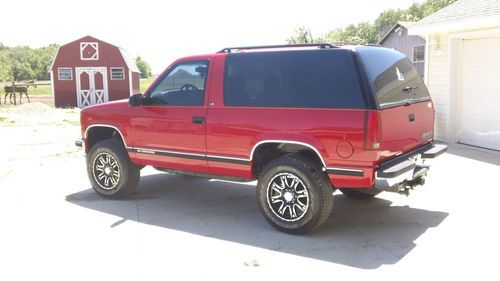 Condition: Used: A vehicle is considered used if it has been registered and issued a title. Used vehicles have had at least one previous owner. The condition of the exterior, interior and engine can vary depending on the vehicle's history. See the seller's listing for full details and description of any imperfections. ...
Very nice 2 door Tahoe
We have just invested around 5,000 in to this truck but my wife decided she wanted a Ford F250
Brand new 265-65-18 rims with Bridgstone dueler a/t tires less than 100 miles
New borg warner transmission
New lifetime warranty radiator with all new lines
New water pump, power steering pump, carpet, and upper/lower ball joints
We put all these parts on to make sure it was dependable whether it needed them or not
There are a few small burn holes on the seat and doors but, I will let the pictures speak for the condition of this truck
Come drive it if you like
Call 574-257-0887
Check out my other items!
WE HAVE A HIGH FEEDBACK SCORE BECAUSE WE BELIEVE IN PROVIDING QUALITY ITEMS AS DESCRIBED! BID WITH CONFIDENCE! WE PROVIDE AS MUCH INFORMATION ABOUT THE ITEMS AS POSSIBLE BUT, PLEASE FEEL FREE TO ASK QUESTIONS. WE TRY TO REPLY WITHIN 24 HRS. PAYPAL ACCEPTED. NO RETURNS UNLESS DAMAGED IN SHIPPING AND THEN, YOU MUST KEEP ALL PACKAGING PRODUCTS FOR INSURANCE.
THANK YOU!