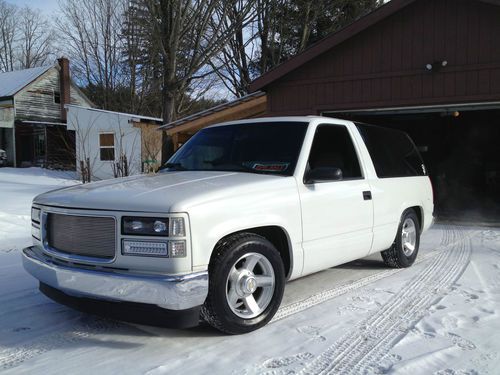 Up for sale is my 96' 2dr 2wd Yukon SLT that I bought about a year ago out of California. I shipped it up to NY and started to clean it up and make some minor changes. I have all of the receipts from what I have done to the Yukon and at this point with another SUV and two other trucks under my name, I don't want or have the room for this anymore. It currently resides in my garage and sits on a battery tender. The only problem I have had with it is the fuel pump went out and I had to replace it. It runs and drives well especially for being lowered, stops well and start up every time without a problem. It has never been driven in snow or salt, I just pulled it out of the garage for the pictures and then rolled it back in. Here is a list of what I have done to it in the time that I have owned it and associated prices-

-Removed front lights and grill sanded down and painted the core support, radiator shroud and inner fenders
-Scrubbed, sanded and repainted inner wheel wells both front and rear
-Sanded and spot painted the frame
-Removed all of the interior:
> Cleaned and re-dyed all panels and pillars
> Cleaned and conditioned the leather seats
> Cleaned, shampooed and scrubbed the front carpet
-Went through all of the door jambs with some light cutting compound and brought the faded/stained paint back to life

This is actually all I can remember doing at this point and time. Here is what I was told was done to the Yukon before I bought it and what I looked at and confirmed

Aside from that, there really isn't much to the Yukon. It has a clean carfax that I can send to you to you can see that I am the 5th owner and have had it for 8 months and that there is nothing to hide about it. I've enjoyed it, but if I were to keep it I would rather have a tailgate instead of barn doors and a few other minor things that I would change. Now, as I have mentioned everything I have done and what I know to be good about the Yukon...here is some of the bad. I have included pictures of everything and they are at the end of the gallery.

- Three dents on the pass front fender
- Slight damage from a car thief in Cali on the Pass door handle
- One of the previous owners removed the roof rack and filled the holes with silicon or something...I was planning buying another roof rack but haven't found one yet.
- One small ding in the pass side quarter about 3 inches from the door
- Drivers side seat has a rip in it

If you have any questions about the Yukon even after everything I've said, feel free to ask. I do have a reserve on it and don't bother asking what it is. I've looked around several sites and priced the Yukon accordingly, am I losing money on it...of course. Am I gonna let someone else get a rock bottom deal, heck no. I think my price is more than fair for the condition of the Yukon and the miles it has. I see 130k+ mile Tahoe's and Yukon's sell on here and other sites for $5000-6500 all the time, so there is no point trying to low ball me. If you want it, you'll get a fair price and that is the way I am looking at it.

I am including the Front portion of the Poly Vinyl matting, and a new spectre air filter in with the sale. I also have a set of American Racing wheels built to a special offset specifically for this Yukon if you are interested. Let me know ahead of time.

I didn't notice until now that the miles in the description don't match the picture. I must be dyslexic or something, the miles are what are pictured. 92,625