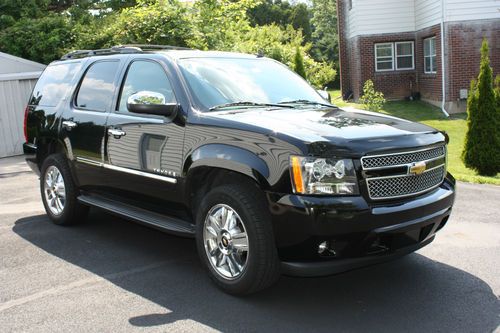 Up for sale is my personal car, I am not a car dealer.  We have had this car for a little over 2 years and have loved and enjoyed every minute of worry free ownership.  No mechanical problems of any kind, this car is as solid as they come and maybe the best car GM makes.  We purchased from a local Infiniti dealer who got it traded in (we came to test drive the Infiniti QX56 but my wife fell in-love with the Tahoe and we took it home that day  :-)

The car has EVERY option that is offered on the Yukon including the Upgraded Chrome rims and grill.  This is my wife’s daily driver, school, groceries, kid’s activities.  We own a small sedan that we take to the city and I have my work van if we need to haul stuff, in other words nothing but kids in this car, never towed, moved, or did anything else to strain or damage the car.  Synthetic Oil every 5000 miles and regular maintenance checks, (just passed PA inspection and installed 4 new Goodyear tires for $1200 last month!)  This car has been garage kept and babied in every way.

Here is the list of options the car has, there are too many to list but I will do my best:

Serious Buyers only, No games played and no low ball offers.  Certified cashiers check or cash ONLY.  I will not ship the car unless it is fully paid for and all arrangements for pickup are made by buyer.  Feel free to email me with any questions you may have (effiavitan@gmail.com).  Thanks.