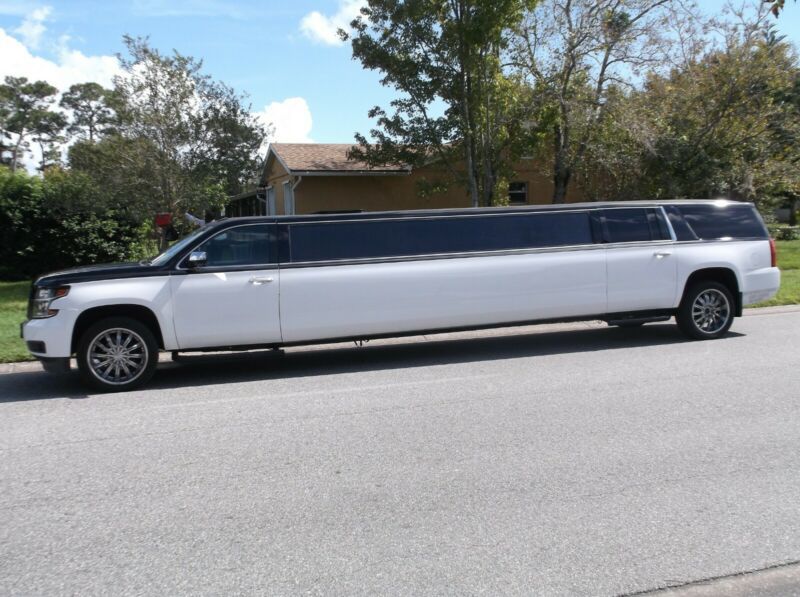 This is a very nice and clean 2015 Chevy Suburban 16 Passengers Stretch Limo. This is the TUXEDO (white and black)
outside and inside as you see in the pictures. The vehicle has 39000 miles and has been professionally maintained
and in Perfect Mechanical condition. The Interior design is perfect for all types of celebrations and creates a
nice atmosphere especially when coupled with the brilliant and happy lighting combinations.

The outside features a sleek white paint Job and contrasted by the dark Tinted Windows that span the Length of the
Vehicle with Some small area peeled as shown in the pictures and a small paint Chip by the Rear Door. However, the
inside experience is amazing and includes Mirrored wave-lit Ceilings, a Bar area stocked with Glasses. The dual
color Panda Stylish Leather seats compliment the Interior lighting to provide every transportation service with a
big Spoil.

Of Course, in addition to the ample room for up to 16 Passengers (16 seat belts), this limo also has two additional
benches in the back that could easily seat 5-6 kids. this Stretch has many other Features such as Surround Sound
System, Back Camera …etc. Perfect for Large Groups, Wedding ceremonies, Corporate Events and much more.