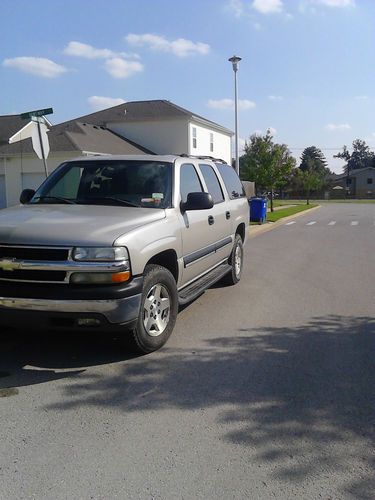 Condition: UsedA vehicle is considered used if it has been registered and issued a title. Used vehicles have had at least one previous owner. The condition of the exterior, interior and engine can vary depending on the vehicle's history. See the seller's listing for full details and description of any imperfections.Seller Notes:"Runs great, but needs a tune up, shocks and struts and passenger rear side has cosmetic damage from bumping a dumpster. Some stains on interior primarily on floor boards and center console needs replacing. Tires just over a year old with warranty and lifetime brakes installed in June."

Gold, 2004 Chevrolet Suburban.188100 miles. Runs great, but needs some mechanical work such as tune up and new shocks and struts. Cosmetic damage to right, rear passenger side where I bumped a dumpster. Stains on floor boards. Dvd player installed, but not working. Pretty easy to replace though. Includes am/fm radio and cd player. Power locks, windows, seats and cruise control. Tires installed just over a year ago and lifetime brakes installed in June. Has been maintained regularly. I will pay to have the car detailed and for a portion of the work needed if asking price is paid. It is for sale by owner and title is clear.