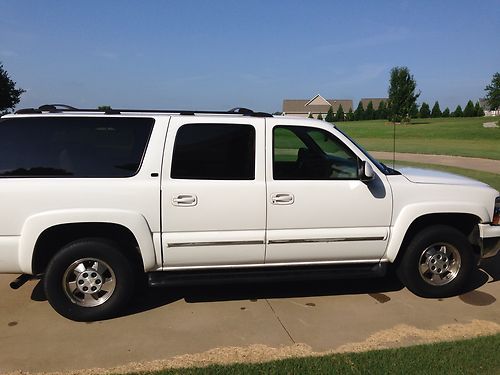 Condition: UsedA vehicle is considered used if it has been registered and issued a title. Used vehicles have had at least one previous owner. The condition of the exterior, interior and engine can vary depending on the vehicle's history. See the seller's listing for full details and description of any imperfections.Seller Notes:"This Suburban has served us well for many years. It was my wife's car and has high mileage due to interstate travel. It has 285,000 miles and we. Have never had any major engine or transmission problems. It still runs perfect we have just bought other vehicles now. With 285k miles, there is normal wear and tear that would be expected. I'll describe that below. Exterior- good condition overall. Front bumper has a crack that has been mended on the front right corner. Quarter sized dent in front drivers side quarter panel. Few minor scratches around exterior (none excessive or deep). Rear wiper doesn't workDrive train- no problems running. Slow oil leak from rear main seal. Catalytic converter bad, but doesn't effect performance. Interior- drivers seat has worn through at the back left upon enter and exit. Drivers arm rest covering cracked. Carpet has 285k worth of wear at drivers side, rest of the carpet in good condition. Rest of interior in very good condition all the way back."

This has been the perfect vehicle for my family. We bought it in 04 with 60,000 miles on it and have put the rest of the miles on ourselves. My wife has been the primary driver and the miles are mostly interstate travel. We have never had any major engine problems with this vehicle. It has been well cared for and maintained over the years. We have been so pleased that we bought a 2008 Suburban with the same engine and transmission. Also bought a truck with the same and hope for the same results. I have had it tuned up at 100k and 200 k miles. The starter, water pump, and fuel pump have been replaced. It has a slow oil leak from the rear main seal, it is less than 1 qt. between oil changes, so not major. Transmission runs flawlessly with no past problems.

The interior is in good condition considering the mileage. Drivers seat has some wear on seat bottom and arm rest. The rest of the interior is in very good condition.
Exterior is in very good condition with a few minor blemishes. Front right bumper has a crack in it that has been mended. Small dent in front drivers side quarter panel. There are a few minor scratches around the vehicle, but no big or deep ones.
The Suburban has never been smoked in. It has been well cared for over the years and evidently has many more miles left in it. It is still running great with no issues. The car is offered as is and has a KBB value over $5,400 in its current condition. The reserve is well under that and the buyer will be pleased. You will find the vehicle as described and I have communicated all known issues. Please ask any questions you may have and I'll do my best. If you need any additional pictures I will accommodate any request.