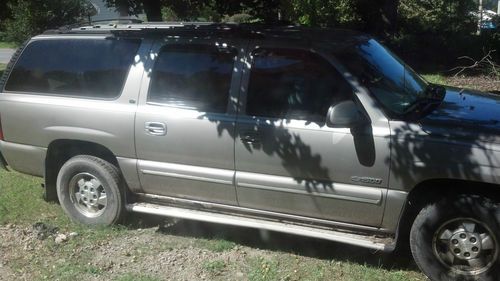 Condition: UsedA vehicle is considered used if it has been registered and issued a title. Used vehicles have had at least one previous owner. The condition of the exterior, interior and engine can vary depending on the vehicle's history. See the seller's listing for full details and description of any imperfections.Seller Notes:"This suburban will need and not limited to, brakes pads, brake lines, and emergency brake pull tab. this car has been unused except regular short trips around the nieghborhood to keep her fluids flowing, she is a dependable truck some body rust, many cosmetic extras, all in all a good truck."

You are looking at a 2001 chevy suburban. she needs a little tlc, but her heart and core are solid, she has not been on the road for 2 years now, but is driven short distances to keep her fluids moving. she needs brake lines for sure, and an oil change. She has been a very reliable truck to our family. Trying to sell her quickly so with serious offers please contact, chrisrobertson1972@gmail.com