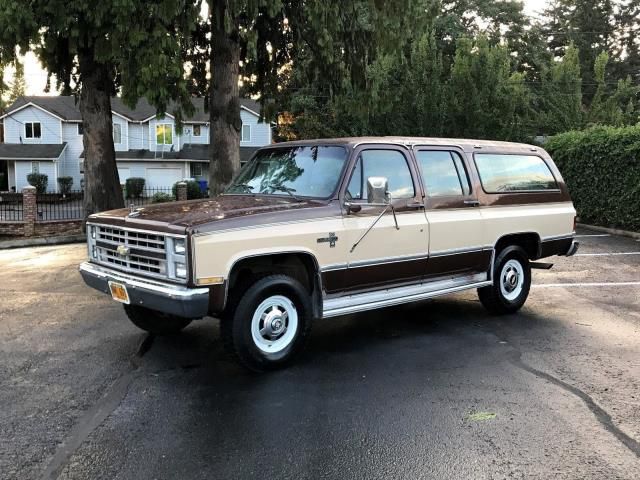 For further questions email me : LisaStotzdnwj@yahoo.com For Sale Worldwide OVER 140 FULL SIZE PICTURES TO VIEW BELOWTO THE BOTTOM OF THEADD... THIS IS A 3-DAY RESERVE!!! AUCTION !!!HIGHEST BIDDER WILL WIN THISBEAUTIFUL LOW MILEAGE CHEVY 4'WHEEL DRIVE 2500 SUBURBAN SPORT UTILITY !ONCE THE RESERVE IS MET !! HERE IS YOUR CHANCE TO OWN THIS RARE AND HARD TO FIND ONE IN THIS CONDITION.. DRIVESPORT UTILITY VEHICLEPOWERED BY A VERY HEALTY AND SMOOTH RUNNING5.7'LITER 350 8'CYLINDERENGINE!! AUTOMATIC TRANSMISSIONTHAT SHIFTS INTO ALL GEARS WITH NO ISSUSES WOW(ONLY 104,681 ORIGINAL MILES ) THIS WAS A 1-FAMILY OWNED CHEVY 4WDIT'S A NONSMOKER NON PET OWNED VEHICLEWELL CARED FORE AND ALWAYS SERVICE SINCE 1988VEHICLEWAS PURCHASE IN OREGON STATEHAS BEEN IN THE STATE OF OREGON SINCE NEWTHISVEHICLE WAS ORDERED WITH THE 5.7'LITER V8 350 ENGINE WITH A 3/4TONCHASSISTHE ONLY WAY TO GET THESE TRUCKS LIKE THIS WAS BY A SPECIAL ORDERED FROMTHE DEALER CLEAN HISTORYNO DENTS - NO DINGS HAS SOME VERY SMALL SCRATCHESALLSTOCK - ALL ORIGINAL - AND MOSTLY FACTORY!! HAS ALL FACTORY OPTIONSPOWER DOORLOCKSPOWER WINDOWSMANUAL MIRRORS MANUAL DRIVER AND PASSENGER STEERING WHEELPOWER STEERINGFACTORY AM-FM BOARDS NICE CHROME BUMPERS FRONT AND REAR NICE FACTORY16'INCH STEEL WHEELS WITH CENTER CAPSWITHGOOD CONDITION WILD COUNTRY RADIALRVT TIRES 4WD AUTOMATIC LOCKING HUBSHASTOWING PACKAGEWITHBRAKING CONTROLER THIS4'WHEEL DRIVE RUNS, DRIVES, STOPS, TURNS AND LOOKS GREAT!BEEN KEPT UNDERCAR PORT COVER FOR MOST OF ITS LIFEIT IS IN EXCELLENT CONDITION!!!