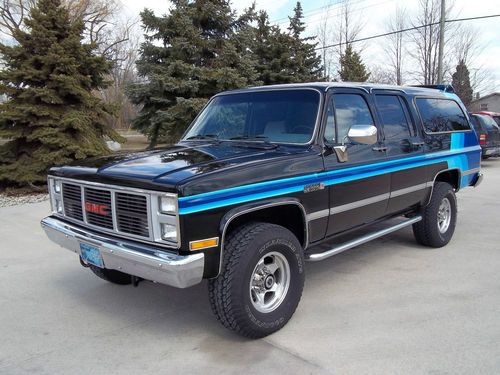 I HAVE OWNED THIS TRUCK SINCE 1991.I WAS AT THE GMC DEALER WHEN MY FRIEND PURCHASED IT NEW.THE ONLY REASON I AM SELLING THIS TRUCK IS I PURCHASED A BIGGER BOAT AND I NEED A BIGGER TRUCK TO TOW IT.MY FRIEND PURCHASED THIS TRUCK NEW JUST TO TOW HIS BOAT.I STORED THE TRUCK IN MY BUILDING DURING THE WINTERS FOR HIM.IN 1991 I PURCHASED IT FROM HIM AND USED IT JUST TO TOW MY BOAT.THE TRUCK WAS ALWAYS KEPT IN MY BUILDING SUMMER AND WINTER EXCEPT WHEN I USED MY BOAT.IT HAS NEVER BEEN IN THE SNOW OR SALT.I HAD THE STRIPS PUT ON IT IN 1993 TO MATCH MY BOAT.WHEN THEY WERE PAINTED ON THE ORIGINAL BLACK PAINT AND THEN CLEAR WAS APPLIED OVER THEM.MUCH OF THE ORIGINAL BLACK IS STILL ON THE TRUCK.A FEW YEARS BACK I HAD THE ROOF AND HOOD PAINTED AND CLEARED.THERE IS A SMALL DENT IN THE TAIL GATE UNDER THE CHROME DOOR OPENER THE PAINT IS NOT PERFECT AND THERE ARE SOME SMALL MARKES FROM BEING DRIVEN FOR 27 YEARSI WOULD GIVE THE PAINT A 90%.THE INTERIOR IS ALL ORIGINAL.LAST YEAR I HAD THE FRONT SEATS RECOVERED IN THE ORIGINAL MATERIAL.THEY ARE LIKE NEW AND THE REST OF THE INTERIOR IS MINT INCLUDING THE 3RD ROW SEAT.IT HAS AN AFTERMARKET STEREO WITH C D PLAYER WITH REMOTE CONTROL.THE DRIVE TRAIN IS ALL ORIGINAL AND IN EXCELLENT WORKING ORDER.THE ENGINE RUNS SMOOTH AND HAS PLENTY OF POWER.THE ENGINE IS A 350 HO AND REQUIRES MED GRADE FUEL. THE 350 HO WAS THE LARGEST ENGINE AVAILABLE WITH 4X4.THE ENGINE HAS A FACTORY BLOCK HEATER THAT I HAVE NEVER USED. IT HAS A TORBO 400 TRANSMISSION WITH 4 WHEEL DRIVE.I USE THE 4 WHEEL DRIVE AT THE BOAT RAMP AND IT WORKS SMOOTH.THE AXLES ARE 411 POSI HEAVY DUTY.THE TRUCK CAME FROM THE FACTORY WITH DUEL EXHAUST.I REPLACES IT A FEW YEARS BACK WITH A CUSTOM MADE AND INSTALLED STAINLESS SYSTEM.THE MUFFLERS ARE ALSO STAINLESS.LAST YEAR I REPLACED ALL OF THE BRAKES.THEY WERE ORIGINAL.I REBUILT THE CALIPERS AND WHEEL CYLINDERS AND INSTALLED THE BEST PEDS AND SHOES AND ALL NEW HARDWARE.THE WHEELS WERE INSTALLED ABOUT 10 YEARS AGO I DO NOT HAVE THE STOCK WHEELS.THE RUNNING BOARDS WERE INSTALLED IN 1992 AND HAVE NO RUST AND LOOK GREAT.I FEW YEARS BACK I TOOK THE CARBURATOR OFF REBUILT IT AND PUT IT BACK ON. I HAVE REBUILT MANY OF THOSE CARBS AND THIS ONE WORKS LIKE NEW.THE DRIVE TRAIN IS ALL STOCK.I HAVE MAINTAINED THIS TRUCK SINCE IT WAS NEW.THE OIL WAS CHANGED EVERY YEAR.I CHANGED IT EVERY YEAR BECOUSE I DONT PUT MANY MILES ON IT.EVERY THING WORKS.WINDOWS REAR WINDOW REAR DEFROSTER AND EVERYTHING ELSE.THE TIRES ARE ABOUT 70%.THIS TRUCK NEEDS NOTHING.IF YOU WANTED TO TOW SOMTHING THIS TRUCK IS READY.I BELEAVE IT IS A COLLECTABLE AS WELL.EVERY PLACE I GO WITH IT I GET COMPLEMENTS AND IT IS FUN TO DRIVE.I BELEAVE I HAVE A REASONABLE RESERVE FOR WHAT THIS TRUCK IS.I DO WANT TO SELL IT TO MAKE ROOM FOR THE BIGGER TRUCK.