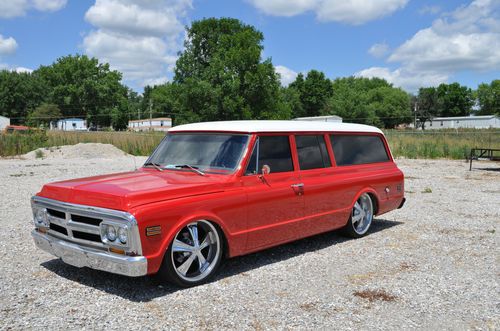 Beautiful 1969 GMC Suburban,  I have bought this about 2 years ago and began working on it, originally came from California,  All body work done by professional.

Were to start, I love this vehicle, and I dont care how old or young someone is, this vehicle gets there attention.. I have to sell her, my wife and I just had another child
and that is were I need to spend my time and money.  This vehicle is about 95% complete lets start at the front.
36,300 original Miles
1000 miles on this Burb since it has been done
-Upper and lower control arms removed, inspected, sand blasted and powder coated
-All ball joints were replaced at this time.
-Front sway bar
-Drop spindels
-Inner fenders sandblasted and powder coated
-Original Grill and front bumper
-New style headlights
-Vintage air AC installed
-3 core aluminum radiator
-SBC, roller motor, vortec heads, 270\276 comp cam, motor has 2500 miles on fresh rebuild
-new master cylinder,brake booster, and booster pump
-New Disc brakes at all 4 wheels, with powder coated calipers-zinc washed-drilled and slotted
-Keep it Clean wiring kit, the burb has been completely rewired with new style fuse box and wires
-Undercoating
-22" wheels on new tires
-Ridetech Air Ride suspension at all 4 corners, controles are in the glove box
-New floor sections, new inner and outer rocker panels, everything seam sealed and painted
-New carpet throughout
-Heat shield and padding under carpet
-Lokar-gas,brake,emergency brake,and light dimmer pedals
-4 bucket seats out of 2003 suburban with custom new style center console with power window switches mounted in center console-driver power seat, seat belts built into seats
-3 row seat out of 2003 subrban
-factory suburban bench in the very back
-Custom full length door panels all 4 door panels have kicker 1-5 1/4" speaker and 1-1" speaker mounted in each door. Amp for those speakers is mounted in center console
-Custom outside mirrors with led blinkers in them
- Custom rear trailing arms from Ridetech
-Frame notch kit from CCP
-Custom rear panhard bar kit from strong arms
-White powder coated diff cover
-New 342 gears, rear end rebuilt
-Shiney Hiney rear led tail lights
-Custom gas shock lift gate conversion
-Windows tinted at 5%
-This Burb has never spent the night outside since it has been painted
I know there is more, and I will be listing it as the week goes by and I will get some better pictures up this evening
-Now for the 5% that is not done yet- The rear end has been rebuilt, but it is still whinny, the transmission leaks, I have tracked down the leak but I have no time or money to pull the transmission right now...it shifts and works GREAT, just leaky.  The seats are straight out of 2003 suburban, they look great but a couple of them have some little rips in them, check out the pictures.  This burban drive and rides like a dream, it has alot of power for a big vehicle, and sounds great.  I will put some videos up of it later today also