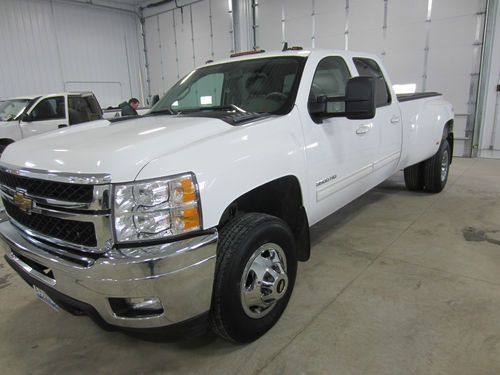 UP For sale is a 2011 chevrolet 3500 dually crew cab 4x4 diesel truck I ordered truck from local dealership i owned truck for 2 years just put in a  new short block engine has only around 100 miles on it when truck broke down i bought different truck so now this 1 is for sale very nice clean truck its interior is very clean truck has some scratches and paint chips driver side seat has a small crack otherwise truck is in like new conditon new tires only have 20 miles on them installed engine at local chevy dealership here in Milbank SD Unzen moters new engine cost $12200 dollers  This truck is a real nice truck has a bedliner and rolltarp also truck comes with all weathertec floor matts  Nice Nice Nice. call me with any questions  605-695-3795  .