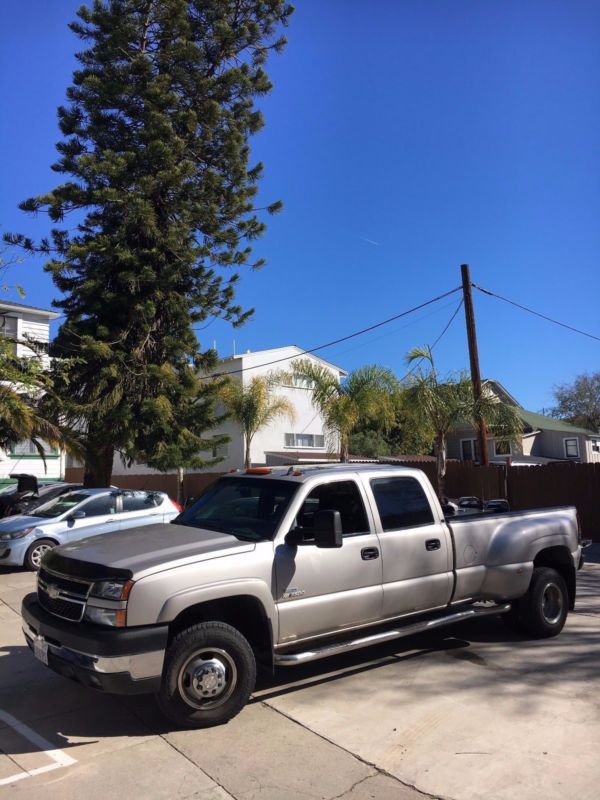 Just email me at: rudolfrvvolper@chocoholic.org .

2007 Chevy Silverado LT diesel 3500. 6.6 engine. Allison/Duramax. Crew cab.
All leather, all power. Heated seats. Tow package for 5th wheel, and trailer. Bose stereo (does not play Cd's).
Onstar. SUNROOF (rare for these trucks). Seats 5. New tires. Registration paid till July. New brakes. New Tires
w/high tow rating. 103,000 miles. 4 wheel drive. Truck bed liner. Custom locking tool box w/ 60 gallon fuel tank.
There are a few small scratches in the paint. This was a second vehicle only used for towing the 5th wheel. With
the extra 60 gallons I could tow for 900 miles before stopping at a gas station. This was really nice when towing a
36 ft DRV. NO RUST. Southern California Owned.
2007 Chevy Silverado 3500 LT is considered to be the best of the large diesel trucks. Chevy had corrected the
bearing and injector problems seen in earlier models, and this is before the new emissions regulations were added.
This truck has better preformance and lower maintenance costs.
Allison / Duramax 103k. 4x4. Leather. 5th Wheel
Keyless entry.
Towing 16,000 Rv, 13 mpg.
Feel free to ask questions.