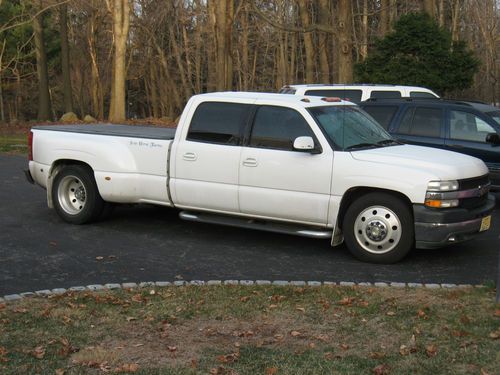 up for sale is a great looking chevy dually in excellent condition ---was a calif. truck --i brought it to the east coast about 2 yrs ago -----no rust or dents and the the inter. is just perfect with its deep gray leather heated seats ----truck runs fine however it needs injectors ---with my wifes hospital bills i just do not have the money to put into it ---MAKE NO MISTAKE YOU  CAN DRIVE THIS TRUCK HOME WITH NO PROBLEMS --I WAS JUST TOLD THAT SOMETIME IT WILL NEED THE INJECTORS REPLACED ---IT STARTS UP EVERYTIME EVEN IN THE COLDEST WEATHER EVEN AFTER SITTING FOR 10 DAYS AT A TIME -----the truck has a lowered susp. in the front --i believe it is by belltech and a airbag susp in the rear ---19 in. alcoa wheels--rhino lined bed and a hard rollup bed cover -----truck has a really long low look to it and gets attention were ever it goes----it is so nice not to have to pull out a ladder to get into it----just a fun truck   but i need the money to take care of some pressing matters---i reserve the right to end auction early ---call if interested ---973-714-3175 ----thanks dennis

PLS CALL IF YOU NEED MORE INFO ON THE TRUCK AND ALL IT OPTIONS ---I FORGOT TO MENTION A FEW ---973-714-3175------ALSO PLS DO NOT TELL ME YOU ARE BUYING THIS FOR A RELATIVE AND YOU WANT TO SEND MONEY ETC. ---I WILL NOT ANSWER TEXT MESSAGES OR EMAILS THAT DO NOT COME THRU EBAY ---THOSE GAMES ARE LONG OVER USED ---THIS TRUCK WOULD BE A GREAT BUY FOR SOMEONE WHO CAN DO THE INJECTORS THEMSELF OR JUST DRIVE IT UNTIL YOU HAVE THE MONEY TO HAVE SOME ELSE DO IT   AGAIN PLS CALL IF YOU HAVE QUESTIONS I WILL ANSWER THEM TO THE BEST OF MY ABILITY----973---714---3175