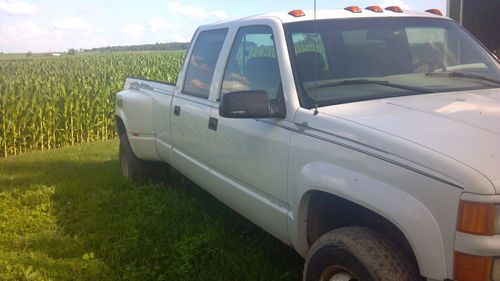 Condition: Used: A vehicle is considered used if it has been registered and issued a title. Used vehicles have had at least one previous owner. The condition of the exterior, interior and engine can vary depending on the vehicle's history. See the seller's listing for full details and description of any imperfections. ...
Former work truck we have used in our business for 10 yrs.
It had a boom with bucket so it was driven from job to job and stayed the duration of project.
We parked it in the winter.
Odometer has 144,578 miles
The 7.1 V-8 was rebuilt @110,000
So that is 34,000 miles on motor.
Cold air
Tilt, cruise, am-fm CD,
Long Bed
New gas tank
New fuel pump
New brakes front 2012
New brakes on back 2010
New Starter 2013
Has decent interior not bad
Regular service on all fluid and filters.
Tires about 70%
Brake Box
Heater/AC switch only works on hi
Typical GM paint pealing for that year
Fiberglass fenders are a bunged up some
Good solid not rusty
Note the picture of the frame with bed off
Two new cherry mufflers
Lots of truck left runs great
Great 1- ton with a stable stance
pull your horses, camper or any trailer.
Don't need it sitting around anymore.
No Warranty