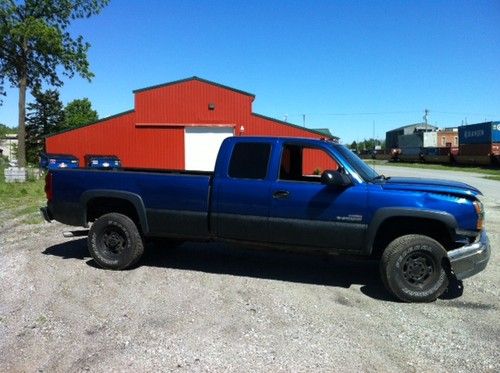 Up for auction is my 2003 Chevy silverado 2500hd 4x4 duramax diesel. The truck is in rough but salvageable shape The dog house is pretty beaten up. The cab corners and rocker panels are completely rotted through but the doors and bed are in ok condition with some rust but nothing major. The interior is in fair condition and needs to be put back together but everything works except the gauge cluster is going bad (oil pressure gauge,lights,and gear indicator).The frame is incredibly solid the rear end makes no noise and it has a new drive shaft and all front end components are in good shape(very tight). The transmission is in need of a rebuild or a programming not sure witch seems to have a mind of its own some days, transfer case works fine takes a minute to disengage some times but other than that works good. The motor is a 6.6 duramax with 235k on it but it runs very strong no fuel knock or white smoke and always starts like a champ. Basically this truck would make a great donor truck or even a daily driver if some one wanted to put the time in to it. Truck is being sold as is no refunds or warranties and i will not ship it, local pick up only If you have any questions please dont hesitate to ask thanks for your time and happy bidding.