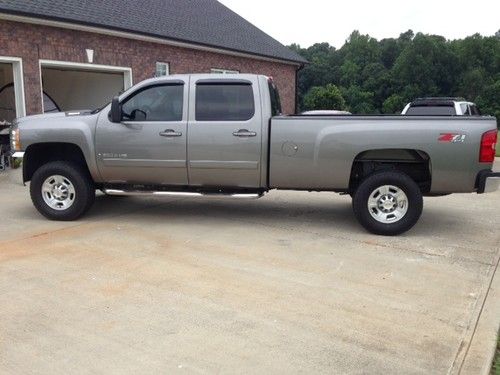 Condition: UsedA vehicle is considered used if it has been registered and issued a title. Used vehicles have had at least one previous owner. The condition of the exterior, interior and engine can vary depending on the vehicle's history. See the seller's listing for full details and description of any imperfections.Seller Notes:"Excellent Condition"

2008 Chevrolet Silverado 2500 HD Crew Cab 4x4 Duramax Diesel LTZ.  I am the second owner.  The truck has always been maintained at the dealership and garage kept.  The only thing I pull is a 6500lb camper twice a year.  The truck is stock other than a leveling kit that was professionally installed.  Has Nitto Terra Grappler tires that have about 75% tread left.  Power and heated leather seats, Sun Roof, Navigation and rear entertainment DVD.  B&W Hidden hitch and sprayed in bed liner.  Plus many more options.