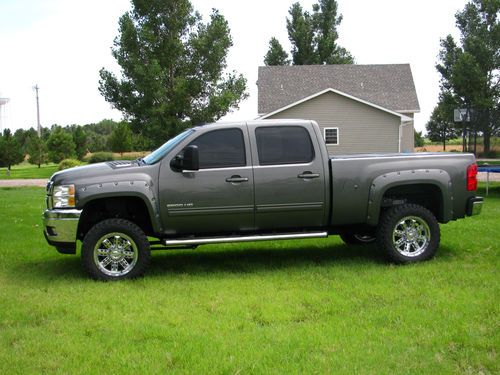 I am selling my 2011 Chevy 2500 LTZ Duramax.  This pickup is in mint condition inside and out.  It has all the options DVD player, heated Leather, rear electric slider.  It has Alloy gear Nitro 20 inch wheels with Nitto trail grappler M/T 295/60/R20 tires.  I put on Bushwhacker fender flares painted to match. It has an Rancho 4 in. lift kit with air lift air bags on the rear with on board compressor and gauge.  I also put clear bra on the front of the hood the rocker panels and all leading edges where rocks would hit.  I eliminated the factory exhaust and Urea and put on an H&S tuner     I have the stock exhaust that will go with it  also have the stock shocks and spindles if you ever want to take the lift kit off.  I Rhino lined the box and put BakFlip tonneau cover on you have total use of the box with this cover.. It has an B&W turnover goose neck ball also.  This pickup is tricked out  and in excellent condition it has been inside since new.  The only reason I am getting rid of it is I have another 2011 and I don't drive this one.  I would prefer you call me rather than message me if you want prompt return.   Kasey 308-352-8063