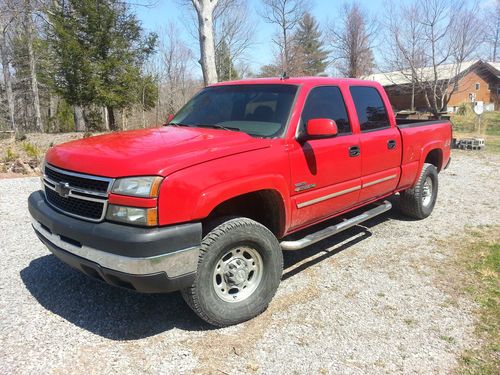 Its a 06 Duramax that runs like a dream with no problems at all. I love this truck but its time to move on to something different. Im the second owner of this truck and it was completely stock when I got it at about 225k miles. It has 245k miles now. I run Amsoil synthetic in the motor. I just changed the oil so it will be good for another 20k miles before its next change. The 6 speed Allison shifts perfectly. 4x4 works great. The truck is a LT. Has cloth interior that looks brand new. No bad places on the interior at all. Truck has NO rust. The exterior is in very good shape as well. Has a small ding in the front bumper thats hard to see unless you look for it. I will include a carfax showing that Im the second owner of the truck and its not been in any accidents.TASTEFUL MODS: -Airaid cold air intake-Aligator performance pcv reroute -Hypertech programmer -MBRP 5" Black turbo back exhaust 6" tip-Truck has been leveled and has 305/70/16 10ply Cooper All Terrains (70% tread)-Has DDM HID's on the low beamsTrades Im interested in:Im only interested in 6 speed manual trucks that are 4x4. Looking for either a mega cab SRW or a 4 door short bed. Mileage doesnt matter too much to me.

Im going to start the auction price low with no reserve. This truck books for 17,100 private party and I will start it at 14k which is 3k under book value. Someone will get a great deal on a great truck. My number is 423-261-5260 if you have any questions. Call or txt anytime. If no response just message me on here and Ill get back to you asap. Thanks and have a great day, Ross